2008 has been the summer of the superheroes. It started with the scintillating Iron Man, followed by The Incredible Hulk. But the best of them all, maybe the best movie of 2008 so far, is The Dark Knight. And dark it is. Very dark! But it is a movie that raises many ethical issues and classic morality questions asked in philosophy classes, such as: Who would you choose if you could only save one of two friends?

Like Iron Man, Batman is really not a superhero. He has no superpowers. Instead, he is a human, with physical and mental force as well as flaws, and this movie shows them all. More than a superhero comic book movie, this is a gritty crime drama that could be compared with the best of this genre. Director Christopher Nolan is on top of his game. He has proved his mettle with earlier movies such as Memento and Batman Begins. But he surpassed himself here. With a tag-line of "Why so serious?" repeated often by the Joker, you might suppose there is some humor in the film, but it is anything but funny.

This is the first Batman film lacking his name in the title, and perhaps it communicates that this is no ordinary Batman movie. And as Batman, Christian Bale is no ordinary Batman. Indeed, he is head and shoulders above the rest. He gives a strong performance. But the acting honors go to the late Heath Ledger in a career-defining performance as the Joker. He steals every scene he is in. Wearing face-paint to cover his character's scars, his lip-smacking performance is scary crazy. This is not Jack Nicholson's Joker, a funny joking criminal. This is an anarchist, a twisted evil man, who terrifies. This is a performance that should earn him a posthumous Oscar nomination, perhaps even the trophy. He could be the first actor to win an Oscar posthumously since Peter Finch in Network back in 1976.

As the movie begins, Gotham City seems a little cleaner and safer. There are fake batman characters emulating the hooded vigilante. Criminals are afraid to be on the streets. Enter the Joker. A psychotic bank robber who dreams of a world without rules, he will shake up Gotham and its underworld. He wants to kill the Batman. Like Nero, he wants to watch as everything burns, figuratively and actually.

In The Dark Knight Gotham has a new DA, Harvey Dent (Aaron Eckhart), who is at odds with Police Chief Gordon (Gary Oldman). Corruption in the police is rife, but Dent knows it and is not afraid. He is the hope of the city, its white knight. And his damsel is Rachel Dawes, Bruce Wayne's dream but not-to-be girlfriend. Played with charm and spunk by Maggie Gyllenhaal, she replaces Katie Holmes who soullessly filled these same shoes in Batman Begins.

Michael Caine returns as Alfred the sardonic and wise-cracking butler, as does Morgan Freeman as CEO of Wayne Enterprises, Lucius Fox. O

nce again, Fox is the creator of some fabulous techno-toys, including a bat-bike and a bat-suit that lets Batman turn his head. With a new costume and gadgets on hand, this is an action-packed thriller, with a first-rate cast. There are some outstanding stunts, such as when Batman "flies" out of a high-rise office. And there are some terrific action sequences, including the incredible chase where the Joker ultimately gets captured.

But this is not the Batman from the 1960s where Adam West was campy and comfy in his spandex suit. That Batman was a clear-cut American good-guy, who fought by society's standards. Nolan's Batman is much more complex. He does what it takes to catch the bad guys, what most people will not do. While most will not resort to violence, Batman recognizes that in fighting a war violence is necessary. You cannot sweet talk criminals into obeying the law. Labeled a vigilante by the society he is protecting, and viewed as "deeply flawed" since he is willing to violate society's mores and fight fire with fire, Batman still holds fast to one rule: he is no executioner. He won't kill. 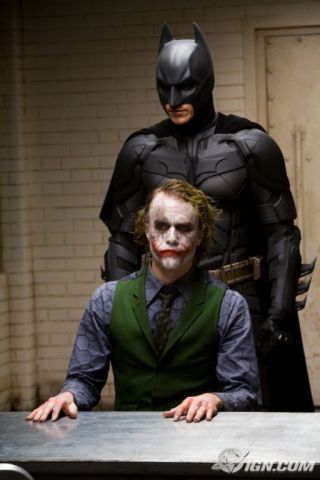 As Gordon exits the interrogation cell, Batman symbolically comes out of the shadows. He pulls no punches in his questioning of the Joker. To get an answer, Batman will stop at nothing . . . except the violation of his one rule. He will not be pulled down to the Joker's level of a world without rules.

The first moral issue that is raised revolves around two people, one of whom will die. With the Joker in an interrogation cell, he reveals that two key characters are in danger in two different locations, and there is only time to save one. This is a classic moral conundrum. People have dreams about this one. Who would you save? Batman has to face a choice. If it was our spouse and our child, who would we go for? And how would we make such a difficult decision? Hard to imagine, but we feel the tension and the pain Batman goes through.

As the Joker continues to terrorize Gotham, it is clear that he is not motivated by money. There is something more going on in his twisted head. At one point he says, "I am an agent of chaos. And you know the thing about chaos, Harvey? It's fair." For the Joker, chaos is fair. But for Dent, when he later confronts Gordon in his now twisted persona of Two Face, he has a different opinion on fair. "You thought we could be decent men at an indecent time. But you were wrong; the world is cruel, and the only morality in a cruel world is chance. Unbiased. Unprejudiced. Fair." For Dent, chance, not chaos, is fair.

And that is one of the themes of the movie: fairness vs chaos, fairness vs chance. Is chance fair? As a parent, I often hear the words, "It's not fair." So fairness is something that rings true in the heart of all people. Fair means to be free from bias, dishonesty, or injustice. Chance is the absence of any cause of events that can be predicted, understood, or controlled. On the flip side, chaos is a state of utter confusion or disorder; a total lack of organization or order. So, in a sense, both the Joker and Two Face are correct in that chance and chaos are both fair. Perhaps it is better said in the negative: neither are unfair, since neither involve bias. However, chaos caused with a criminal intent is unjust and hence unfair. Similarly, chance that is controlled, as when a coin flip is repeated to get the desired result, is unfair.

When the Joker raises the stakes he raises another problem of mores. He pits convicts against common citizens. He wants to remove the veneer of civilization from the citizens of the city and prove that they are depraved and without rules, without morals. It is another tough dilemma. What will the "righteous" citizens do? Will they consider themselves superior to the convicts? Will the convicts succumb to their baser, survival instincts? A philosophical poser. Like Satan, the Joker is fighting for the soul of Gotham city

In answering this question in The Dark Knight, Nolan paints a picture of depravity and grace. Biblically, all have been impacted by sin are depraved. Yet, there is grace present in the world which causes even the worst of sinners to do some good and kind things. We can empathize with the well-dressed businessman who wants to condemn the convicts but wonder if we could or would pull the trigger. 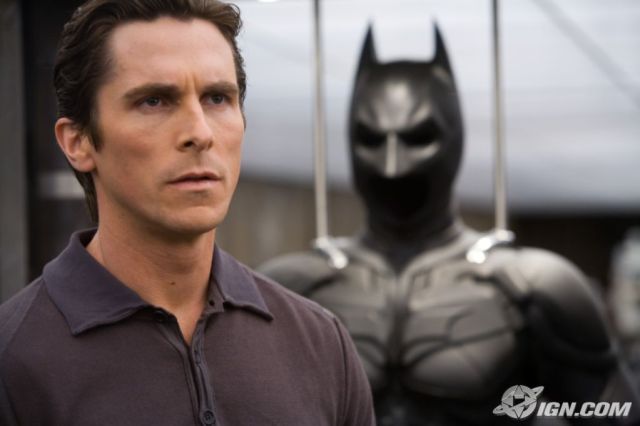 When Batman finally faces off with the Joker in the first climax, it is clear that things have changed, forever. Batman cannot go back to being who he was. The "insanity" of the Joker and the "righteousness" of Batman are both tainted; neither are pure. There is no black and white, only shades of gray, just like in real life. In some warped sense, the Joker is the dark side of Batman. As he says to Batman, "you complete me."

Accomplishing what he set out to do, cause chaos, The Joker "took Gotham's white knight, and brought him down to our level." Harvey Dent, the proclaimed savior of Gotham City, failed the test. As he unknowingly prophecies early in the film, "You either die a hero or you live long enough to see yourself become the villain." The movie closes with Batman as the Dark Knight. White has become dark, dark is really white. Perception is reality and Batman becomes the hunted, rather than the hunter. In real life, Jesus is the Savior. However, to many he is not the white knight we need, but the dark knight they deplore. Is Jesus your dark knight, as you chase him away, or your white knight, who has already provided all you need for this life and beyond?