Lars and the Real Girl is an unconventional but poignantly beautiful comedy about loving, accepting and growing up. It ranks with Juno as one of the most redemptive movies of 2007. Indeed, Christianity Today in one of its polls voted it Most Redemptive movie of the year.

Ryan Gosling is Lars Lindstrom, a semi-recluse, living in the garage while his brother Gus (Paul Schneider) and wife Karin (Emily Mortimer) have the house. The romantic interest that is central to the movie is Bianca, a real doll, also known as a sex doll. With no dialog, she is in almost every scene, and the characters, especially Lars, play convincingly as though she is real.

Lars is thirty-something with a job but no real life, no deep relationships. He cannot bear to be touched, and this is a metophor for his unresolved childhood insecurity. As he interacts with Gus and town physician Dr. Dagmar (Patricia Clarkson), we progressively see the long-standing causes of his mental illness and isolation. Everything changes when Lars orders Bianca to be delivered to his door. He believes she is real, though wheelchair bound. Now that he has a "girlfriend" he emerges from his shell and interacts with his family. The scene when he introduces Bianca to Gus and Karin is a classic of jaw-dropped shock.

In a visit to Dagmar, she suggests to Gus and Karin that they play-along with this delusion: "You won't be able to change his mind, anyway. Bianca's in town for a reason." This is tough for a man to take, and Gus says, "Everyone's gonna laugh at him," to which Dagmar retorts

, "And you." This is hitting one of Gus's own insecurities: he does not want to be a laughing stock for the community.

But Gus's fears prove groundless, because in a meeting with the church pastor and some members, the pastor finally asks the cliched question, "What would Jesus do?" Well, Jesus would accept the marginalized, the sick, the wounded. And that is what the community does. They agree to go along with Lars' belief. They begin to treat Bianca as though she were a real girl.

Lars stands out among Hollywood movies for treating church and church-goers as real people. The reverend is a person, not a stereotype. The parishioners are not caricature Christians who are bigoted and anti-everything. Instead, they are normal not beautiful. But they show what it means to follow Jesus in community.

As Lars develops, the town folk have put shoe leather on their love for Bianca, which is really their love for Lars. They take her to places, they hang with her, they party with her. This is a wonderful picture of acceptance and love. Gus had feared Lars would experience rejection and painful mocking for his mental illness, and this is a typical response to things misunderstood. Yet instead, he receives love. Not love merely in words, but true love that is shown in its actions. And love is the redemptive oil that lubricates relationships and enables personal and spiritual growth. 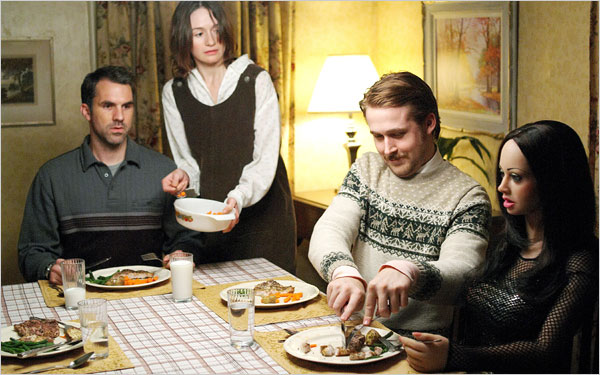 If acceptance and love is one area Lars needs to develop, the other is in shedding his childhood (symbolized here by the baby blanket he still carries around with him) and becoming a man. He asks Gus, "How'd you know . . . that you were a man?" Gus answers, "Well, it's not like you're one thing or the other, okay? There's still a kid inside but you grow up when you decide to do right, okay, and not what's right for you, what's right for everybody, even when it hurts." Moving into manhood, especially for Lars, is a choice to act. This corresponds to the apostle Paul's own advice, "When I became a man, I put childish ways behind me" (1 Cor. 13:11).

Eventually, Bianca develops a fatal illness. In the midst of tragedy, three elderly sewers come over simply to sit with Lars. This is so reminiscent of Job's comforters. When tragedy strikes, sitting with someone quietly is perhaps the greatest gift we can give them. Inaction over action is needed, since there is usually no action that can solve the problem. We Americans so often want to fix things immediately. But we cannot fix tragedy.


As with most tragedies, this one ends in "death". The church is packed for the funeral, but this is no sombre occasion (though I personally shed a tear or two), this is a celebration of life. Bianca is eulogized as one who "reached out and touched us all, in ways we could never have imagined. She was a teacher. She was a lesson in courage." And she is a real doll. This is a eulogy we would all desire to have for our own, but how many of us can inspire such words? This shows that it sometimes takes one person, one character, to bring a community together. That one person can make all the difference in the world. It can mean acceptance and love, in contrast with rejection and scorn. Jesus came to offer this kind of community, and he gives us the grace to make this community happen here and now. To a large degree, this is what the kingdom of God is all about. Are we prepared to be a real guy or a real doll for those around us? I hope so.