What would you do if your parents were to arrange your marriage? How would you feel if your traditions and upbringing mandated that they took the leadership in finding you your spouse? This flies in the face of the individualism prevalent in Western culture.

This is the premise of the storyline for Arranged, an independent movie that grossed a mere $20K at the box office but pulled in 6 awards in international film festivals. But it is more than this. It is the emotionally moving story of a friendship that crosses religious boundaries.

At the beginning we see Rachel (Zoe Lister Jones) and Nasira (Francis Benhamou) in a lunch-room overhearing a fellow teacher share how she "found" the engagement ring in her fiance's bedroom. She is clearly awaiting her rock from her beau. But the two protagonists, like a pair of fish out of water, look at each other with sadness and resignation. The contrast between the world of this woman and their worlds could not have been any greater. And it is due to their religions: Rachel is an orthodox Jew and Nasira is a Muslim. 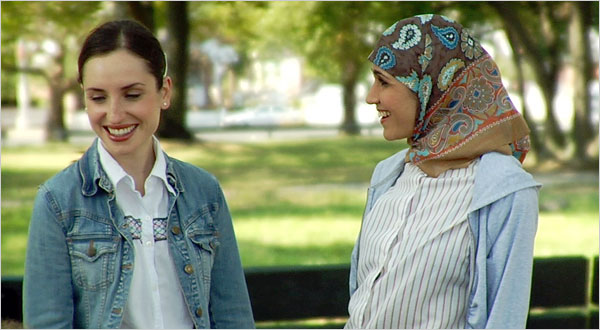 Rachel and Nasira are two brand new grade-school teachers in New York City. The key question in the movie is posited by the kids early, when they ask the two teachers if they hate each other. The kids have learned that Muslims hate Jews and vice versa, and so expect this position to play out in front of their very eyes. The question, more broadly, is: can a person be friends with someone of another religion, particularly if there is hositlity between their two faiths?

Rachel and Nasira are outsiders, through their dress (in traditional garb), through their faith, through their commitment to traditions. This is a challenge to the principal, who ignorantly insults them. But this insult, together with the kids' question, is the catalyst that throws them together and sparks a genuine friendship.

Jones has the tougher acting role. She has to communicate fear and uncertainty at the beginning, knowing little about the Jewish method of shadchan that she is to be a participant in. Then after going out with several of the men that the "matchmaker" thinks will work for her, she has to stand up to her parents and relatives, all of whom are trying to help her. Finally, she has to communicate her inner battle as she decides if she will pull away from her roots and traditions, potentially separating herself from her family, to find a partner herself.

Although Arranged is not a comedy, there is a hilarious scene where four or five of these dates are put together into one montage. It is clear that none of these Jewish bachelors is right for her.

Arranged gives a glimpse into the orthodox Jewish home as well as into the Muslim home. We see the faith of these two religions evident in the lives of their followers, ordinary people. Indeed, it is refreshing to see a film where a Muslim is not portrayed as a fanatic or terrorist. Here Nasiri and her family are living oridinary lives like many others in New York or America. There is nothing hostile about them.

In contrast, when Rachel brings Nasiri to her home to do some school prep it is a challenge to her orthodox Jewish family. Her mother cannot accept a Muslim in her home without her husband's approval. But this is not so much out of hatred, as out of fear that it will be noticed by her neighbors. This could be a problem for them and for Rachel in her "matchmaking" process. It is clear that friendships across religious lines is an issue for her.

Arranged also gives us a glimpse into the practice of arranged marriages. The fathers describe it well when they tell their daughters that they want what is best for their children. Knowing them since birth, and knowing their characters and personalities, they believe they can best pick a future life-partner for them. This is almost anathema to American culture, where individual control is championed. Biblically, arranged marriages occurred in the Old Testament, such as for Abraham's son Isaac (Gen. 24).

Further, arranged marriages may help to protect the faith of those entering marriage because the parents can ensure that they match with someone of like faith. Paul tells us "Do not be yoked together with unbelievers" (2 Cor. 6:14), since marriage of a Jesus follower to an unbeliever has the potential to undermine the faith of the former.

There is nothing ethically wrong with arranged marriages. Indeed, in a society where statistically one in two marriages ends in divorce, is the western way any better? Might it be more effective when dating to simply flip a coin and save years of heartache? I say this flippantly, having experienced (and continuing to experience) the joy of a long successful marriage entered into the American way, that is to say unarranged. But the truth is that many marriages don't survive, but end in divorce.

The beauty of the movie, though, is in the friendship that develops between Rachel and Nasira. The two women rise to the initial challenge and find themselves more similar than dissimilar through their betrothal arrangement procedures. They prove their principal and their students wrong. Not only can they live out their traditions in the 21st century, but they also can have a friendship that crosses religious lines. They do not focus on their religious differences. Their faiths do not separate them. Their common humanity draws them together. As they rely on each other, they are able to handle the religious pressures each face at home and the societal pressures they face at school. Their friendship even allows them to take some level of control without rejecting their traditional values. They emerge stronger women, happier women, more understanding women because of this friendship, without sacrificing or compromising their individual faith convictions.

Arranged made me reflect on my friendships. Do I have friends from other religions? Am I willing to develop relationships with people of other faiths with no agenda other than to enjoy them? How often do Christians seek to befriend people simply to evangelize them, to proselytize? And if they reject the gospel, are they, in turn, rejected and discarded as friends? In pluralistic America, the melting pot of so many nationalities and religions, can we afford not to take the message of Arranged to heart?