A recent movie I saw at the cinema (Philomena) focused on a mother desperately searching for her son. In this film, we find a boy desperately searching for his father. Both are poignant dramas. Both were nominated for awards (Philomena in 2013, Kid with Bike in 2011). But there is where the similarities end. Kid with a Bike is a French movie from the Dardenne brothers, that plays out in slow fashion, quite the opposite of a typical Hollywood film. Refusing to use a musical score to pluck the viewer's emotions, the Dardennes use a powerful device to catch attention. Four times they play a 15 second segment of Beethoven's Emperor Concerto, almost the only music in the film, and in so doing force us to see the bigger picture and transitions of the film.

Kid with a Bike opens with the kid, Cyril (Thomas Doret) without a bike. More than this, though, he is a kid without a father. We meet Cyril at the group home his father has dumped him in. As an 11 year-old, Cyril needs his father, and wants the bike his father still has. So he goes searching for his dad. He ends up in a doctor's office being chased by the director of the foster home. He grabs hold of a woman, Samantha (Cecile De France), to avoid being taken back. This is Samantha's first brief and unexpected encounter with Cyril. 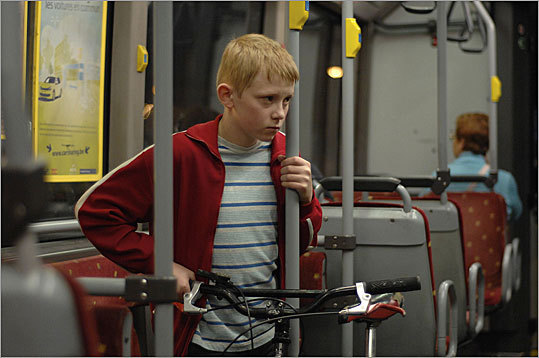 After this meeting, and having witnessed Cyril's passionate desire to get his bike back, Samantha buys it back for him and delivers it to the foster home. On a whim, Cyril asks her if she will let him stay with her on the weekends. Surprisingly, she agrees. This sets up the context for the rest of the film.

The Dardenne brothers show normal life for this hairdresser and her weekend foster child. He embarks on a quest to find his father. He also encounters a bully who leads him into a gang whose leader seduces him toward a criminal life. Along the way, minor violence occurs which forces both Cyril and Samantha to face up to the consequences of Cyril's choices.

Several themes emerge. First, Cyril's father refuses to take him back: "It's too much. I can't look after him." Further, he refuses to tell Cyril the truth, cowardly trying to make Samantha tell Cyril this unwanted news. Here is a father who walks away from his responsibilities. Is there a smaller coward than this? Becoming a father is a small act that bears huge consequences. A man who fathers a child must act like a father. To do otherwise is a violation of familial function. There is no excuse. A man must think before he acts, and count the cost of his intended actions (Lk. 14:28).

Cyril, on the other hand, acts like a child would. He needs his father. He desperately wants someone there for him. (We never know about his mother.) Cyril even goes out of his way to give his father what he seems to want in hope that he will want his son back. He simply does not understand how his father could not want him, could discard him like a used wrapper. God has shown us what a father should be, in his role as our father. He has also told us, "Fathers, do not embitter your children" (1 Col. 3:21). As a father, I can and do make many mistakes. But failing to love my children, even abandoning them, would be the way to most embitter them. It is perhaps the worst thing a father could do.

Finally, Samantha the hairdresser begs the question, why. Why would she take on a stranger, particularly a very troubled boy? She did not count the cost. And there was a cost to her: emotional, relational, physical and even financial cost. Why would she do this? The Dardennes never give us a clear answer,  although she seems almost as needy as Cyril.

Yet Samantha reminds us of another parent who took on troubled children: God. Yet, he did count the cost and realized it would be huge: it cost him his only son. "While we were still sinners, Christ died for us" (Rom. 5:8). His love changes us from troubled people, caught up in our own issues and sins, to those who become like Jesus, loving others. Selfishness turns to selflessness. Perhaps with Christ central in our lives, we might look to help the Cyrils we run into in our daily lives.


Two years after winning an Oscar for Directing the hugely successful The English Patient, Anthony Minghella helmed this vehicle and was nominated for another Oscar, this time for Best Adapted Screenplay (from the book by Patricia Highsmith). Like his previous film, this movie moves slowly but methodically, merging suspense with drama to form a low-key thriller with a terrific jazz score and decadent mood.

From the opening scene we find Tom Ripley (Matt Damon, The Bourne Identity) a man who wears masks. In this scene, though, it is simply a borrowed blazer to allow him to play piano at a party. But this mild deception causes the lavatory attendant with delusions of grandeur to be mistaken for a Princeton grad. When Mr. Greenleaf approaches him with this mistake, Tom plays along and finds himself being offered $1000 to go to Italy to find Dickie Greenleaf (Jude Law, Side Effects), another Princeton grad. But Dickie is a rich kid who enjoys wasting his father’s allowance on jazz records and his girlfriend Marge (Gwyneth Paltrow). A cut to the Mediterranean scene and we see Dickie sunning himself with Marge, lazily lounging on the beach.

En route via luxury liner, Tom meets Meredith (Cate Blanchett, The Hobbit), another rich kid off to enjoy Europe. She is travelling under a different name and will later bump into him and set off a chain of events that will cause Tom to grow ever more deceptive.

Deception is one of the themes of the film, along with moral degeneration. In one of his first meetings with Dickie, he is asked what his singular talent is. Tom replies to his supposed former college buddy, “Forging signatures, telling lies and impersonating almost anyone.” Laying out the truth here allows him to be accepted by Dickie and lays the groundwork for future deceit.

The sad thing is the moral rationalization going on in Tom’s head, which we are privy to: “Well, whatever you do, however terrible, however hurtful, it all makes sense, doesn’t it, in your head. You never meet anybody that thinks they’re a bad person.” Tom clearly starts off thinking he is not a bad person, just one who has some odd talents. But the Bible says otherwise: “The heart is deceitful above all things” (Jer. 17:9). We deceive even ourselves with this kind of thinking. The Psalmist understood this and declared, “Surely I was sinful at birth” (Psa. 51: 5). We can convince ourselves of our self-righteousness, but the truth stands out darkly in contrast. We are sinful and deceitful from the very start.

Tom is a prime example. A poor kid, he dreams of riches. More than this, though, he wants to trade in his boring identity and character for someone more interesting and exciting. So, to slither his way into Dickie’s inner circle, he learns jazz as a common interest and shows this at the ultimate moment to go from acquaintance to new best friend. And although he wins over Dickie he fails to account for two things. First, Dickie is fickle and will cast off a friend just as quickly as he takes them to his bosom. Second, there is Freddie (Philip Seymour Hoffman, Catching Fire), another decadent, gastronomic friend. Freddie, unlike Dickie, is less trusting and can see through Tom’s character.

As Tom gets closer and closer to Dickie, he studies him as a predator would his prey. It even seems that Tom is confused as to whether he wants to love Dickie or be Dickie. But when Dickie spurns Tom’s casual homosexual advance and later reneges on a holiday promise, Tom realizes he wants more of the rich lifestyle than he can get as Ripley. He wants to live Dickie’s life as Dickie.

Tom’s character shows how an initial “white lie” can begin a journey of descent, into deceit, dark lying and murder. This slippery slope begins with lying lips. And “The Lord detests lying lips” (Prov. 12:22).  But it all starts in the heart: “For it is from within, out of a person’s heart, that evil thoughts come—sexual immorality, theft, murder” (Mk. 7:21).

As the movie unfolds, Tom moves from the coast of Italy to Rome where he takes on Dickie’s identity and digs himself deeper into deceit. There are several super suspenseful scenes, centered on Tom almost being discovered in his lies. But Tom evolves, growing cleverer, learning to improvise on the fly with lightning-fast thinking. Though he is a monster, he is intelligent and charming. And since we see from his perspective we are drawn into his schemes. But we also realize how alone he is.

At one point, Tom says, “Don’t you just take the past, and put it in a room in the basement, and lock the door and never go in there? That’s what I do.” He has sealed off the past, including his sins, in a room he wants to avoid. But that means he cannot share his true being with another. He finally recognizes this: “I know. I’m lost, too. I’m going to be stuck in the basement, aren’t I, that’s my . . . terrible, and alone, and dark, and I’ve lied about who I am, and where I am, and now no one will ever find me.” His destiny stands before him: a dark bottomless chasm.

This is perhaps the best definition of lostness in movie history. As Tom verbalizes it, we can picture that dark, lonely basement, with the certainty that no one else will visit it.

Because of our sinful nature, we are all lost before God. We have our own dark basements we dwell in, seemingly safe and secure from the whole world. But this is not security and safety; rather, it is hell. Alone, separate from all humanity and even from the God of humanity. With no one to know us, there is no one to love us. We cannot share our humanity with another. This is terrible and a terror reserved for the darkest corners of hell indeed (2 Pet. 2:4).

But the God of humanity declared, “For the Son of Man came to seek and to save the lost” (Lk. 19:10). Despite our self-righteous self-deceit, Jesus came to rescue us from our basements. He understands our plight. He came as a no one, an illegitimate son of a carpenter, born in a dirty stable. But in taking on our flesh and carrying our sins to the cross, he gives us a chance to put on his cloak. We can clothe ourselves in Jesus (Rom. 13:14). We can call ourselves a brother with Christ. We can identify with Jesus. And in so doing, we find a new identity, one that decries deception and murder, one that pours forth virtue and life. We can find ourselves talented with his divine talents. But only if we put on his blazer.