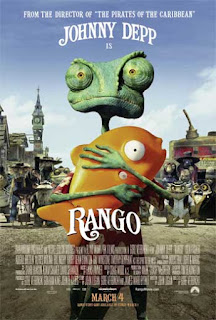 
The Western is a waning genre. Oh there have been flashes of genius in this category, such as the 2010 remake of True Grit, but these have been few and far between. But animated Westerns – that’s another story completely. Those have been like an honest politician: almost impossible to remember. That is, until Rango. Although it is set in present day America, the action takes place in a town that is a throw-back to the 1880s, an anachronism.

Rango is the first animated movie from Industrial Light and Magic, the special effects company created by George Lucas to work on Star WarsIV. And it is quite a movie, picking up the 2012 Oscar for Best Animated Feature. The creative team has crafted a stunningly beautiful film. The colors are vivid, the sound is impressive, and the animation simply spectacular. Even with desert creatures that are hideously ugly, the movie is still marvelous. Gore Verbinski seems a master of animation, despite this being his debut in the medium. But he does know how to make silly action films, as evidenced by the three Pirates of the Caribbean movies he helmed.

The movie opens with a pet lizard (Johnny Depp, Chocolat) in an aquarium. Posturing amongst his props, this chameleon is acting and directing in an imaginary stage play. But when the car he is travelling in swerves to avoid an accident, the aquarium goes flying out the back, only to shatter on the blazing blacktop somewhere in the middle of the Mojave Desert. The lizard finds himself in the middle of the road, left abandoned. Isolated, he is called by Roadkill (Alfred Molina, Chocolat), an armadillo who is, well, . . . roadkill. Roadkill offers him some sage advice about “the Spirit of the West,” an unidentified deity, and then tells him to go to the other side. He is encouraging the lizard to go on a spiritual quest of self-discovery to a town called Dirt. There, the currency is water, but the water supply is dwindling.

When he gets to Dirt, after several misadventures, the lizard enters the saloon. Seeking to impress the locals, the budding thespian spins some tall tales about his exploits taking out the James gang, 7 of them, all with one bullet. When asked his name, he looks at the label on the cactus juice bottle, and shortens Durango (where it was made, in Mexico) to Rango. When he subsequently breathes flames into a thug’s face and then kills the hawk that terrorizes the town, he becomes the town hero and is made sheriff.

Indeed, hero is a key theme of the film. Rango is an unlikely hero. He is an actor-wannabe, obsessed with playing a role. He doesn’t really know who he is, evidenced by his character as lizard with no name, until he becomes Rango. (A nod to the spaghetti westerns that made Clint Eastwood famous; even the music here is reminiscent of Ennio Morricone's haunting score in those films.) But he wants to be a hero, at least while it is still easy. Later, he is told a hero is known by his deeds.

What is a hero? He is a person who commits an act of remarkable bravery, or shows admirable quality of strength or courage. Is he born or does he become one through a combination of circumstances? Most heroes rise to the occasion, not knowing that they are heroic. Rango is like that, at least eventually. When they follow the perceived need and realize that they can meet the need or fill the void, they become the hero that is needed.

We can be like that, too. We are not born into the hero’s mold. But when we follow God’s calling in our lives and allow him to use us, we find he has set out works for us to do (Eph. 2:10). Challenges face us, like Goliath facing David (1 Sam. 17). When we face the giants that oppose us, we become heroes in our own way.

More than this, though, heroes offer something special to those around them – hope.

In the town of Dirt, with the water running dry, the inhabitants are losing hope and leaving. They look to the Mayor (Ned Beatty), a tortoise whose shell forms his wheelchair, but he controls the water and offers little hope. He supervises the weekly doling of the water ration, a zany ritual where the townsfolk dance their way to the spigot whereupon the Mayor leads them in an old-style “worship service”, complete with hallelujah choruses. But Rango’s entrance and presence gives them hope, even while his leadership should be raising questions. He is an actor, after all. What does he know about possees and hangings.

Hope, like water, is crucial for life. Without either life dries up and expires. When times get tough, we long for hope, to find someone to turn to. We want that hero with hope. The Bible gives us this hope-inspiring hero: Jesus Christ. In the New Testament, Matthew tells us, “In his name the nations will put their hope” (Matt. 12:21). In the Old Testament, the psalmist points to God for this hope: “We wait in hope for the LORD; he is our help and our shield” (Psa. 33:20). With this hope in a hero who does not disappoint (Isa. 49:23), we can find anchor for our soul, and thirst for our weary souls (Psa. 42:2).

Verbinski throws in the mandatory love interest, in this case a female lizard named Beans (Isla Fisher, Confessions of a Shopaholic). She sparks Rango’s attraction. He also stirs in a mean villain, Rattlesnake Jake (Bill Nighy, Hot Fuzz), a killer snake with a six-shot shooter in place of a rattle. The most intriguing character is the Spirit of the West (Timothy Olyphant), who literally looks and sounds like Clint Eastwood in his famous “man with no name” role (A Fistful of Dollars). He is the godlike figure who offers more wisdom to Rango: “It’s not about you, it’s about them.” And perhaps more sagely, “No man can walk out of his own story.”

This statement underscores the concept of destiny. We each have a story, a part that we play in the bigger scheme of things, the grander story of history. Mordecai alluded to this when he wrote to Esther in the Old Testament, “And who knows but that you have come to your royal position for such a time as this?” (Est. 4:14). We have an obligation to play out the roles we find ourselves in. In this way, a man makes his story into history.

But the real history is centered in His story, the wonderful story of the hope-giving Christ. As Paul said, “in him we live and move and have our being” (Acts 17:28). Elsewhere, he wrote: “He is before all things, and in him all things hold together.” (Col. 1:17). Indeed, Jesus Christ “is the radiance of God’s glory and the exact representation of his being, sustaining all things by his powerful word” (Heb. 1:3).

Rango accepted the wisdom of the Spirit figure and turned and embraced his destiny. Jesus accepted the wisdom of the Spirit of God (Matt. 3:16) and fully embraced his destiny, even if meant setting his face like flint (Isa. 50:7) to approach crucifixion and death. And while Rango rose to become a hero, Jesus literally rose from the dead to become our hero!