The Book of Eli -- walking by faith 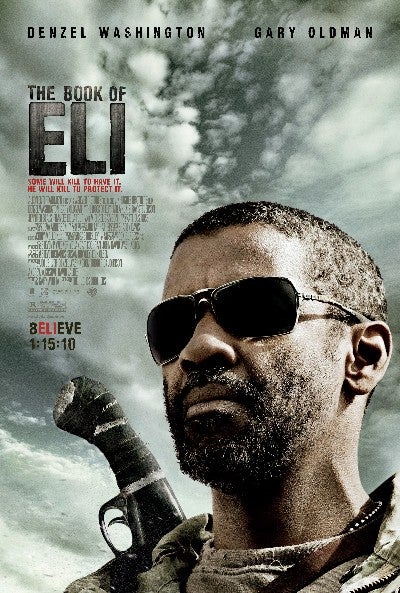 The Book of Eli is a post-apocalyptic vision of Ametica somewhere late in the 21st century. This genre seems to have been over-used in the last decade, with recent offerings like Terminator Salvation and The Road, and my favorite, The Matrix. So, I was ready to soak in the desaturated grays and drab colors, and be mildly disappointed. Surprisingly, I found this addition to be engaging and exciting, if excessively violent.

As the film opens we see dust fall like snow onto the barren landscape. Nothing moves. Then a feral cat creeps up to sniff the toe of a human corpse. Waiting and watching is Eli (Denzel Washington, The Taking of Pelham 1-2-3), with an arrow targeted on the kitty. It will be his dinner. This silent introduction emphasizes the destruction of civilization as we know it and the isolation of this man.

We find out that Eli is a man with a machete on a mission. He is heading west carrying a book. With only the possessions in his leather backpack or in his pockets, he forages and scavenges. When he finds dead bodies he rifles through their pockets for anything valuable. His two prized possessions are the book and an old iPod, that he connects to some form of battery to play music. In an interchange later with a young woman, Eli reflects on life before the event (which remains unexplained): "People had more than they needed. We had no idea what was precious and what wasn't. We threw away things people kill each other for now." 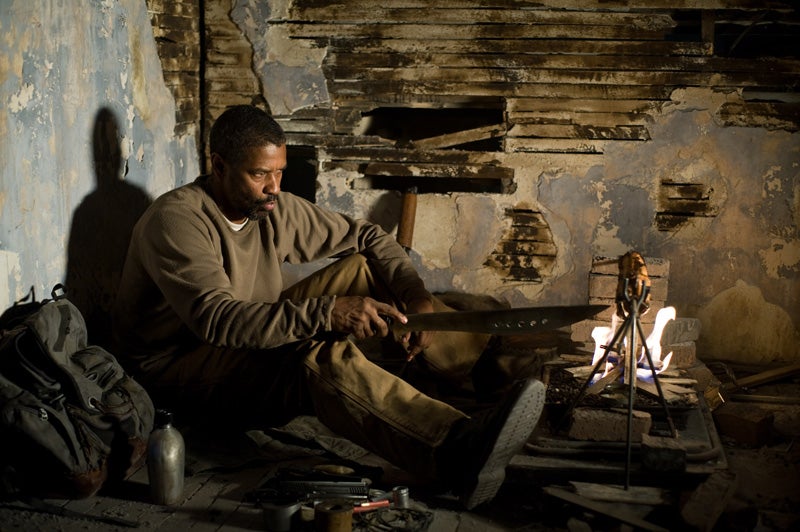 There are a number of clear biblical or moral themes in this movie, and this is the first. With life becoming once more difficult, little things have become precious. The wet wipes from a fast-food restaurant, once a throw-away item, are now valuable in the absence of shower water. In today's America, most of us have way more things and stuff than we need. This is partly a result of the ubiquitous advertising that drums a subconscious message to us that we need more to be satisfied and fulfilled. It is partly a result of our inherent greed and lust for more. The result is the same, though. We are rich without knowing it. We place little value on things because we have so much. When scarcity comes, if it does, these things become useful, and the things we value highly, like our mindless entertainment, becomes useless and irrelevant.

As Eli wanders West, eyes covered behind aviator sunglasses to protect him from the heightened ultra-violet rays, we begin to realize this book is the Bible and it is the only one left. Just as there is a famine of food and water, there is a literal dearth of God's Word. The prophet Amos foretold of events like this in his book, " 'The days are coming,' declares the Sovereign LORD, 'when I will send a famine through the land— not a famine of food or a thirst for water, but a famine of hearing the words of the LORD' " (Amos 8:11). This spiritual famine brings with it a picture of the depravity of man. The characters Eli encounters early on are men who would kill and cannibalize others to feed their own stomachs. There is no morality. It is a grim dog-eat-dog, or man-eat-man, world devoid of God.

When Eli enters a small town we pick up the main plot of the film. And we discover, too, that The Book of Eli is as much a Western as it is a futuristic nightmare vision. The original Western genre had as staples, the saloon, the town boss, usually wicked, gunslingers, an outsider hero (e.g. Shane), and a shootout in the main street between this lone hero and the villains. All of these are present here, with the town boss Carnegie (Gary Oldman, The Dark Knight) apparently the only other book reader. 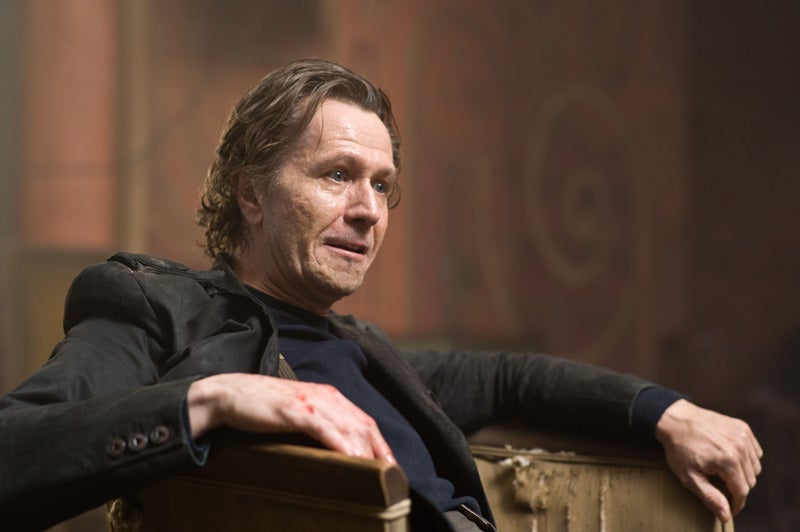 Carnegie is after this rumored Bible. Is he a man of God? No! He is old enough to remember the power present in the Word and thinks of it as the ultimate weapon, one able to control men. He is correct: "For the word of God is living and active. Sharper than any double-edged sword, it penetrates even to dividing soul and spirit, joints and marrow; it judges the thoughts and attitudes of the heart" (Heb. 4:12). It is a weapon that can go on the offense in this way. But it is not a weapon that can be employed by men willy-nilly. God does not permit this. In the early days of the church a man named Simon wanted to use the power of God, the Holy Spirit, for his own purposes, even trying to buy it with money (Acts 8:9-25). But God is not commercial in his sharing of power.

The Word of God is also a powerful defensive weapon. When tempted by the devil after spending 40 days and nights fasting in the desert, Jesus replied with words from Scripture (Matt. 4:1-11). Despite the temptations, the words of the Bible proved sufficient to defend himself from attack. Eli finds the Book powerful as a defensive weapon in a number of instances, though it is clearly the power of the living God that is at work on his behalf.

It is interesting to see a movie that is not a Christian film centered on the Bible. Of course, here it is a central plot point, but it is still delivering a message. Further, Denzel Washington playing Eli (whose name means "My God" in Hebrew) is himself an avowed follower of Jesus.

In one scene the young woman Solara (Mila Kunis) questions Eli how he knows where he is going, and he tells her he is walking by faith not sight. He might be making a reference to her blind mother and the fact that the spiritually blind (Carnegie) are leading the blind (Matt. 15:14). On the other hand, he is citing the plain truth that followers of Christ are called to walk by faith (2 Cor. 5:7). Indeed, the apostle Paul, quoting the prophet Habakuk, in his letter to the Romans declares, "The righteous will live by faith" (Rom. 1:17). We do not always know where God is leading us. But faith implies trust in his leadership. Faith does not require sight or prior knowledge: "faith is being sure of what we hope for and certain of what we do not see" (Heb. 11:1). 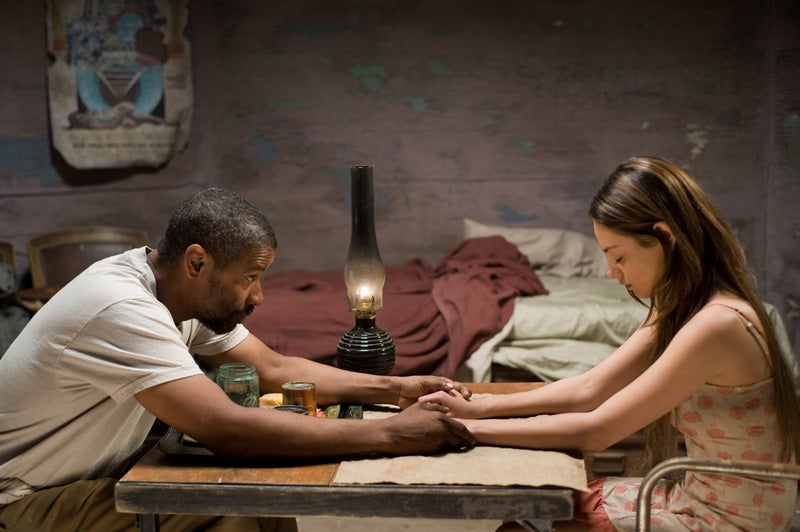 But The Book of Eli is not preachy, calling us to accept a gospel. Using Solara, the daughter of his concubine Claudia (Jennifer Beals), Carnegie discovers that Eli has the long-sought book. This sets up the various violent encounters and set pieces that many Christians will find questionable. The brawl in the saloon takes little time but leaves many dead or maimed on the floor. The gunfight in the high street is quick and bloody. The extended shootout at an isolated ranch is thrilling and realistic. And there is the early savage fight with the cannibals that left them harmless, armless and dead.

Toward the end, Eli comments quietly to Solara, though almost to himself, "In all these years I've been carrying it and reading it every day, I got so caught up in keeping it safe that I forgot to live by what I learned from it." What a challenging thought for those of us who relish the Word of God. Have we lost sight of our mission? It is not to protect the Word of God. It is to live by it and share it with others. Are we still doing this? Or has it gotten lost over time? As James, brother of Jesus, said in his short epistle (Jas. 1:22-25):

Do not merely listen to the word, and so deceive yourselves. Do what it says. Anyone who listens to the word but does not do what it says is like a man who looks at his face in a mirror and, after looking at himself, goes away and immediately forgets what he looks like. But the man who looks intently into the perfect law that gives freedom, and continues to do this, not forgetting what he has heard, but doing it—he will be blessed in what he does.