A box-office bomb when it was released in 1982, Blade Runner has slowly built up a cult following. It was reissued in 1992 as Director's Cut, where the Harrison Ford voice-overs were removed and the final scene was cut to eliminate the happy ending leaving it dark and ambiguous. The consummate version, though, is the recent Final Cut edition. As a prelude to that one (the one I recommend) director Ridley Scott says it is his favorite since he has reshot some scenes, corrected some errors and cleaned up the sound and picture quality.

Blade Runner is a science fiction urban film noir set in 2019 Los Angeles, based on the book "Do Androids Dream of Electric Sheep" by Philip K. Dick. (Indeed, it may be the quintessential science fiction movie.) Harrison Ford plays Rick Deckard, an ex-blade runner policeman who retires (not executes) replicants (androids) who run free on earth.

Ford is perfect in the role of detective, and is Philip Marlowe-esque. In fact, given a brown fedora he could be Marlowe (except Ford wore that hat in Indiana Jones).

Six killer Nexus-6 replicants have escaped from slavery in a distant world and have found passage back to earth. But this is not the earth we know. It is dark, wet and crowded. It is all cement, skyscrapers and slums. There is no greenery. People now stay on earth only if they cannot afford to buy their way off-world. The whole earth, then, is a low-life ghetto. When making the film, the director and producers were fearful of ecological concerns, over-population of the earth, and the death of animal life, and this is evident in this grim futuristic setting.

Deckard is "asked" to come back on the force to hunt these replicants down, and he is given no choice, though we don't know why. He is running from something and does not want this job, but reluctantly takes it. His first task is to talk to Tyrell (Joe Turkel), the owner of the company that made them (" 'more human than human' is our motto"); in this sense, he is the maker of the replicants. At Tyrell's penthouse suite in the pyramid he lives in, he questions Rachel (the beautiful Sean Young), who he discovers is a replicant herself, though she does not know it. "How can it not know what it is?" asks Deckard, and that is a question that lingers.

Rachel is played with acerbic toughness and intelligence. She gets under Deckard's skin, with her beauty and her questions ("Have you ever retired a human by mistake?"). Ford instills a laconic dry wit into his hard-edged Deckard, and they make an intriguing couple.

There are many elements of the true 40s film noir. There is a beautiful femme fatale, Zhora (Joanna Cassidy), a snake-bearing replicant dancer (that was her own pet snake). The film i

s moody and atmospheric (most of it was shot at night in the rain, with smoke-machines producing the smoke that is ubiquitous). Deckard, is a whiskey-drinking loner with a hidden chip on his shoulder. And there is a complex storyline around several criminals (replicant killers in this case).

Ultimately, though, the film is all about what it means to be human. Replicants are emotionally impaired. They cannot experience true emotion, at least at first. They cannot empathize. Is that what differentiates them from humans? Is it emotions that define humanity? Without emotion would we be less human, or even not human? Emotions are important. Indeed, without them life would be so much less colorful. But animals have emotions, though perhaps less developed than humans. Pets, cats and dogs, can show happiness when their owners return. Emotions cannot be what defines humanity.

Blade Runner suggests memories as a differentiator. Tyrell says to Deckard, "If we gift them with a past, we create a cushion or a pillow for their emotions, and consequently, we can control them better." Deckard replies, "Memories! You're talking about memories!" Tyrell had implanted false memories into Rachel, an experimental replicant. She thought she had a childhood. She (and all the replicants) had a love for photographs, false though they were, since they "connected" her to her "memories". With these, she had a past. She "knew" who she was. But they were not hers.

So, the question Blade Runner raises is whether memories define humanity. If we had no memory, would we be any less human? Is a man suffering from acute Alszheimers disease, and hence no memory, sub-human? Obviously, not. Clearly, as above, animals have memories. Pavlov's experiments with dogs proved that. So, memories do not make a man. But how do we know who we are? Memories play a key role here. Most of us look to our family, our jobs, our friends to know who we are, but these are all described in our memory banks. If we had false memories implanted would we be more human or a different person? 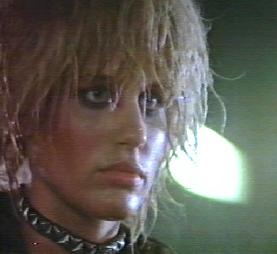 Another of the replicants, Pris (Daryl Hannah looking like a freak), says "I think therefore I am." Referring, of course, to the saying by Rene Descartes, this is a foundational element of philosophy: if someone is wondering whether or not he exists, that is in and of itself proof that he does exist. So, is thought the definition of humanity? No. It is proof of existence but not necessarily of human existence. Angels think, and therefore are, but are not human.

The key antagonist is Roy Batty, played to perfection by Rutger Hauer. He wants life, "More life," beyond the four-years expectancy of a Nexus-6 replicant. His quest is to get this from Tyrell, his maker. And in him, and in his interactions with Tyrell, we find echoes of biblical Christianity. "It's not an easy thing to meet your maker," he says to Tyrell. Tyrell, in turn, refers to Roy as his prodigal son. But if Tyrell is the maker, the creator, the "Father," Roy pierces his hand in a pointed reference to Christ. He is the powerful and superior Son. And in the climactic scenes, Roy carries a white dove, perhaps symbolic of the Holy Spirit (at least symbolic of spirit). There is an un-holy Trinity. Just as all the replicants are man-made, and all of the urban scenery is man-made, we see a human creator, a man-made savior, and a free-spirit dove.

In the violent climax, Deckard faces off against Batty knowing he is less than the replicant in power and strength, even intelligence. In an abandoned theater, they clash unforgettably. Finally, hanging by one hand from a steel rafter the other broken, and dangling hundreds of feet from the ground, Deckard is saved by Batty, who cries out, "Kin!" Awaiting obvious execution (retirement?), Deckard puzzles over why he does not die.

Blade Runner is a tight film noir detective story with a terrific score by Vangelis (he scored Chariots of Fire) and beautiful use of light (and mostly dark) in its cinematography. Yet, beyond the superficial storyline lies some deep philosophical and even theological questions. It raises the question of what it means to be human, and though its answers are lacking biblical support, it makes us think. Biblically, of course, humanity is defined as being made in the image of God (Gen. 1:26), and we are image-bearers of deity. No other created thing has this. As God is Spirit (Jn 4:24), so we too have a spirit. We have body, mind, soul, and spirit. We have emotions, memories, but it is the imago dei that defines us.

In the movie, Deckard comes face to face with replicants who are beautiful and good (Rachel) and beautiful and bad (Pris, Batty, Zhora), but he has to face who he is and what he wants. Clues throughout point to him being a replicant himself -- his unicorn dream, his keen interest in photos, the orange-red gleam in his eye, his attraction to Rachel, his "kinship" with Batty. Dodging the fundamental question of humanity, Blade Runner leaves us hanging on this question: was Deckard a replicant? I think he was; you'll have to decide for yourself.