The 2009 Star Trek reboot reintroduced a whole new generation to the characters of Kirk, Spock, Bones etc, and set the bar high for future installments. Abrams fails to clear his own mark this time, relying on a generic storyline and action sequences that entertain but ultimately fail to fully develop fully the characters. Where his earlier film reset the whole trekkie universe with the destruction of Vulcan and left the way open to explore new parallel universes, this one pays homage to the original series, brings Spock back face-to-face with himself, but does little more than that.

The movie opens with a scene that could have been taken straight from Raiders of the Lost Ark. Captain Kirk (Chris Pine) and Bones McCoy (Karl Urban) are running from spear-throwing natives in the jungles of a distant planet. Meanwhile Spock (Zachary Quinto) descends into the bowels of an active volcano, in an effort to save the planet (it takes a Vulcan to save a planet!). But Spock’s action is suicidal, as the Federation’s Prime Directive prevents the USS Enterprise from saving him, since the spaceship would be seen by the natives, thereby changing history. Spock accepts his impending death, since he is a rule-keeper. But Kirk sees things differently, and once rescued becomes rescuer even if he is breaking a rule or two. This prolog sets the scene and the ultimate theme, rule-keepers vs rule-breakers, to which we will return.

The heart of the story focuses on a renegade Federation officer, John Harrison (Benedict Cumberbatch, most recently of BBC’s Sherlock fame). When he destroys a London data center, causing immense devastation, he sets in motion a series of events, fundamentally pitting himself against the rest of Starfleet. But at that point, Kirk has been demoted from the captaincy of the USS Enterprise, after Spock’s truthful account of his earlier rescue, contradicting Kirk’s more vague record.

In a key scene early on, Admiral Pike (Bruce Greenwood) calls Kirk into his office and verbally reams him: “Do you know what a pain you are? You think the rules don't apply to you. There's greatness in you, but there's not an ounce of humility.” Herein lies the key contrast between Spock and Kirk. While Kirk sees Spock as having a “compulsion to follow the rules,” he himself is reckless. A cowboy, he flies by the seat of his pants.

Which is better: to be a rule-keeper like Spock, or to be a rule-breaker (or be above the rules) like Kirk? Humans have a contradictory compulsion to maintain both in tension. We love rules. We formulate rules for others to keep. This is at the very heart of religion.  As Jesus said of the Pharisees, the religious leaders of his day, quoting the prophet Isaiah, “These people honor me with their lips, but their hearts are far from me. They worship me in vain; their teachings are merely human rules.’ (Mk. 7:6-7) When we have these rules, we have something objective to measure ourselves against, and we can through our own efforts keep these rules and feel proud. This leads to legalism.

But the other end of the spectrum houses the rule-breaking anarchist. Such a person considers himself above the law, apart from the rules. He can do what he likes, he is outside of the system. Such thinking is also proud and superior. In this way, we supplant God and place ourselves on the throne, just as Lucifer did when he rebelled against the creator (Isa. 14:12-14).

The key is to be humble and live with the tension. We must keep the rules where possible, such as the golden rule (Matt. 7:12) and the greatest commandments (Matt. 22:36-38). But we can break the rules when the rules become constrictive and require us to deny God and disobey his commands (Acts 4: 19-20). Of course, this wouldn’t be Star Trek if Kirk did not regain his captaincy. And through catastrophe, he is once more put in charge of the Enterprise and takes the challenge to seek out and destroy Harrison. But when he comes face-to-face with his enemy, he chooses to disobey and defines his own set of rules.

The whole gang is back alongside Kirk and Spock: Bones, Uhura (Zoe Saldana), Sulu (John Cho), Checkov (Anton Yelchin) and my favorite, Scotty (Simon Pegg). Scotty brings the humor, but the film belongs to Cumberbatch, who proves an eminently superior villain in many senses of the word.

The movie has multiple set-piece action sequences, and Abrams is the master of staging these. His big-budget production experience is on display here. And there are any number of references to the original TV series, including Mudd, tribbles, and Khan. But to say more is to give away spoilers.

The other theme that is on display is the evolution of friendship between Kirk and Spock. In the first film, there was a tension between them despite old-Spock’s admission to young Kirk that their friendship was crucial. Here, we see them find this despite Spock’s tendency to put Kirk into trouble. Friendship is one of the joys of humanity. It requires time and energy. It is developed often in the crucible of pain. It evolves through careful choice. When faced with suffering caused by another person, if we choose to forgive the friendship may thrive; if we choose to blame and harbor grudges, the flame of friendship may be extinguished. We see this in Kirk and Spock clearly in this film. And, as clichéd as it may be, they each teach the other a thing or two about feeling emotion and sacrifice.

Their friendship reminds me of two biblical verses. The first is from the book of Proverbs: “A friend loves at all times, and a brother is born for a time of adversity” (Prov. 17:17). Friendship is founded on love. The second comes from Jesus’ upper room discourse to his disciples: “Greater love has no man than this, that a man lay down his life for his friends” (Jn. 15:13). Kirk demonstrates this toward the end, in a poignant scene with Spock, separated by a glass wall. We can only hope for a deeper evolution of character in all crew members in the next film.

Impromptu -- love as a lifestyle 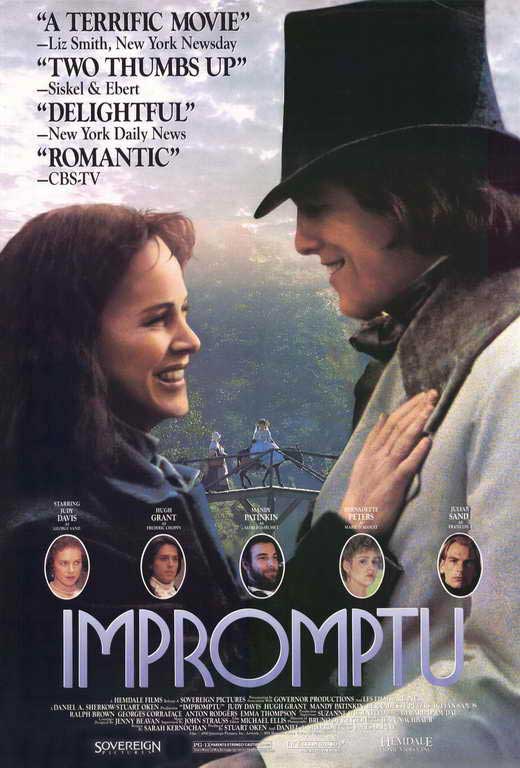 George discovers Fred, a wimpy slightly effeminate artist, and pursues him seeking to become lovers. Sounds like a gay love story, right? Wrong. This is a period piece that has moments of comedy and romance but is mostly a biopic drama.

The film tells the story of Baroness Amandine Aurore Lucie Dupin (Judy Davis) focusing on her pursuit of Frederic Chopin (Hugh Grant, FourWeddings and a Funeral) in mid-19th century France.  A novelist, Dupin was most famous for her disregard for rules and social mores. In particular, she took on the masculine name George Sand, started wearing men’s clothes and smoking cigars in public. None were done as a form of sexual gender-bending; she just found men’s clothing more comfortable, and opened more doors (literally) to her as a woman, and enjoyed tobacco. Indeed, she caroused openly after separating from her baron-husband, and indulged in a number of affairs while writing her non-literary novels.

As the movie begins, she is in her country estate with her two children, hiding behind locked doors from her current lover Mallefille (Georges Corraface), who won’t take the hint that she wants him gone. During a trip to Paris to plead for a further advance on her current work, a memoir, she hears angelic music played by the composer and pianist Chopin, who she fails to meet. But she learns that he will be an an extended artists’ party hosted by the rich but inartistic Duchess D’Antan (Emma Thompson, Brideshead Revisited), a patron of the arts who fancies herself as an artist. So she invites herself to this affair. Present, too, will be Mallefille, George’s ex-lover Alfred (Mandy Patinkin, The Princess Bride), a jealous friend Marie (Bernadette Peters) and her lover Franz Liszt (Julian Sands). 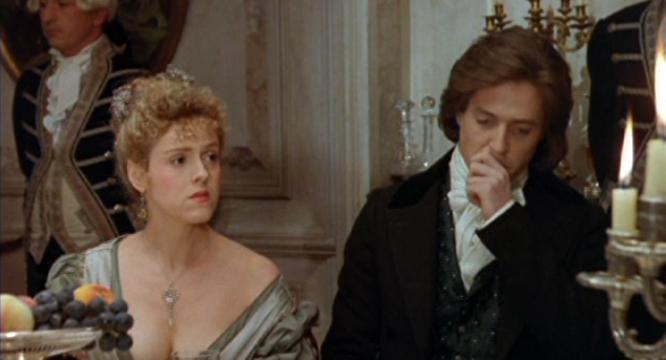 The party offers George an opportunity to meet Chopin, who plays wonderfully but whose personality does not match his pianistic majesty. In contrast, he is wimpy, afraid (“I'm frightened”), and chronically ill. Straitlaced, he finds George’s behavior strange and uncomfortable. But she is not turned off. Rather, she is desperate for his affection and love.

Why is the film titled Impromptu? This is explained in a key scene late in the movie. When George visits Chopin in his studio, he is working on an impromptu, a free-form improvised musical composition. Contrary to the meaning, he is composing not improvising, "Because a perfect impromptu should seem spontaneous and free. No one should be able to guess at the desperate calculation behind it." Just as Chopin is laboring over free-form music, George is laboring over winning his free-form love.

The film gives a picture of decadent living in the pre-French Revolution era.  Scandal and gossip hover over the beautiful, almost impressionistic, locations and the pretty costume pieces. Duels between George’s lovers become a way of seguing from one act to the next. But the acting is so-so. Hugh Grant practices for his signature wimpy Englishman, this time with an ill-delivered Polish accent (which is strange since everyone else except Liszt maintains a British accent). Patinkin and Peters come across the most comedic as the two foils.

One of the delights of the film is its score. WIth beautiful music by Chopin (and Liszt), it underscores the romantic mood he composer conjures from his instrument. It entrances you into going out and building a Chopin playlist on your iTunes . . .  at least it did for me.

There is not much to this movie, amusing though it may be. But one line from George that characterizes her life resonates with biblical themes. She cries out, “I am not full of virtues and noble qualities. I love. That is all. But I love strongly, exclusively and steadfastly.” She lives a lifestyle of love, openly even scandalously.

This statement exemplifies how God sees us and what he wants from us. 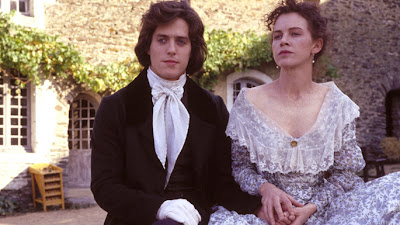 The first half is how we are. We are not full of virtue. Rather, we are full of sin. Paul details this in Rom 3, beginning with, “There is no one righteous, not even one” (Rom. 3:11), describing how sin has affected each of our bodily members (Rom. 3:12-17), and concluding with “for all have sinned and fall short of the glory of God” (Rom.3:23). Any noble qualities we had at creation have been marred by the fall.

Yet, God’s intervention into our messy, gossipy, melodramatic lives in the person of Jesus has opened up the way for us to be transformed. And now he wants us to love. Jesus told us the greatest commandment: “ ‘Love the Lord your God with all your heart and with all your soul and with all your mind.’ This is the first and greatest commandment. And the second is like it: ‘Love your neighbor as yourself.’ “ (Matt. 22:37-39) He wants us to love strongly, him and others. But this love is exclusive: “You shall have no other gods before me” (Ex. 20:3). Like George, our love for God must also be steadfast: “My heart, O God, is steadfast” (Psa. 57:7).

Who would have thought that George Sand, in this mediocre movie, could mimic (mostly) the message of the prophet Micah: “And what does the Lord require of you? To act justly and to love mercy and to walk humbly with your God” (Mic. 6:8)? Love is indeed the key.