The Ides of March -- death of idealism, birth of moral compromise 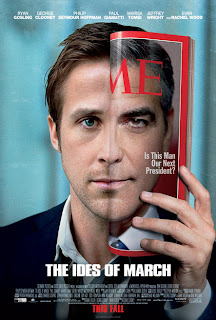 The closing scene mirrors the opening: the same person sits in front of TV cameras in a large room. Yet as he looks coldly at the camera in the final frame, we realize he is not the same person. Stephen Meyers (Ryan Gosling, Lars and the Real Girl) has changed. And the film follows the change in his character, a dark deterioration of his soul.

This political drama, directed by George Clooney from his own screenplay, focuses not on the two political parties, but on the two leading Democrats vying to run for President in 2012. The story, then, centers not on politics per se, but on the impact of politics on the characters at the center of the storm.

George Clooney (The American) plays one of these candidates, Governor Mike Morris, a charismatic and likeable politician whose manifesto inspires hope. He has ideals and plans to make the world a better place. Paul Zara (the excellent and schlumpy Philip Seymour Hoffman, Capote) leads his campaign, supported by press manager Meyers, the thirty-year-old who is not quite young, not quite old. In contrast, Morris’ opponent, Senator Pullman (Michael Mantell), is a bible-thumper from the south; yet his campaign is led by the sleazy Tom Duffy (another wonderful character actor, Paul Giamatti, Duplicity). These form the main characters, although Evan Rachel Ward (Across the Universe) shows up as sexy intern Molly, and Marisa Tomei (The Wrestler) plays Ida Horowicz, a jaded journalist who looks out for herself. And Jeffrey Wright (Source Code) has a minor role as Senator Thompson, a key politician whose favor will carry the nomination. He plays his cards close to his chest.

"The Ides of March" usually refers to the day (March 15) when Julius Caesar was stabbed to death by a group of his senators. Here, though, I think it refers to a different death, the death of idealism or innocence as found in Meyers. At the start, he states passionately that he works for Morris because he believes in the candidate and his ideals. He sees Morris as the one man who can make a difference in America, and even in the world. Meyers places his hope in Morris. But as the film progresses, his hope slowly deteriorates and he begins to compromise his own morals. It is tempting to place our trust in a specific person, or even in people. Whether that person is a politician or a friend, a husband or a lover, we believe they will change the world or simply change our world. Yet, the truth is that everyone will let us down at some point. Even the best of friends will breach a trust and we will find ourselves disappointed at best, devastated and deeply damaged at worst. When we look to a sinful and broken person to be the provider of hope, we can be sure to find that hope lost. Sin has ensured that. We all stand condemned as sinners (Rom. 3:23). There is no exception (Rom. 3:10). But there is a person who will not disappoint, who we can trust to not let us down – Jesus. He is the sinless son of God (1 Pet. 2:22) who promised us life if we will follow him (Jn. 10:10), a life that will include suffering on the earth (Rom. 8:17) but which will be bereft of tears and sorrow in heaven (Rev. 21:4). In him all the promises of God are a resounding yes (2 Cor. 1:20). He is no politician, changing his words and his allies as the winds blow. No, he is our faithful and true redeemer (Gal. 3:13). He is the one person we can and should turn to.

In the first act, Meyers’ idealism stands in center stage. He follows Morris like a hound-dog with media-savvy ideas. It seems the film is about the two candidates. But two events turn the film into a compelling drama, a gripping character study full of intrigue and deception. The first occurs when Meyers makes a mistake and enters a meeting he should have avoided. The second occurs when he sleeps with the intern. There, he discovers a secret, one that shatters his idealism. In one moment, his carefully constructed world comes crashing down. Later, he confronts Molly and tells her that in the big leagues you get only one shot and one mistake sends you back home. This seems cold and callous, yet it comes full circle as he himself has had made the mistake that bans him from the big game.

Meyers has it right, though, when he says to one character that the mistake was not an accident but a choice. Mistakes have consequences but imply no moral involvement. When we see them as a choice that we made, we are forced to accept our moral accountability. When we lay the grid of “choice” back over the film, or even over our lives, we see things more clearly, we understand that all is not well with the souls of the major characters, or with our own soul. Our bent is to sin. Our choices tend to be selfish and self-protective.

The second act depicts Meyer’s deterioration into moral compromise. And we see that all the characters, including Morris, are players, seeking to play even as they in turn are being played. At the end, Stephen’s transformation is evident in his interaction with Ida, the journalist. Earlier she had told him their “friendship” was a superficial mask that allowed each to get ahead: she got the scoop from him, and he got a positive write-up from her. Friendship had nothing to do with it. Now, as he walks as an insider past the cordon that is stopping her, she asks him, “Hey, Steve. I’m still your friend, right?” He stops, and coolly gazes at her before replying, “You’re my best friend, Ida.” He has fallen from idealism.

Yet one thing is troubling. For a thirty-year-old who has masterminded the press campaigns for a number of politicians, it is difficult to understand how Meyers could have remained dewy-eyed and innocent. Even lesser politics than presidential nominations would have tarnished the innocence he carried. This idealism is implausible, although it allows for his fall from the grace.


“it’s essentially an action movie, one that moves so quickly and takes so many sharp turns you’ll leave finger impressions all over your theater seat and leave feeling a little whiplashed. And yet the thrills all come through character development and intense conversations; there are no scenes of violence here, no guns, no car chases.”

The strength of the film is indeed its acting. With a cast this stellar, that is to be expected.

If you like political intrigue and strong character-driven films, this is one for you. But it is dark and somewhat depressing, offering little in the way of hope. The cleanest character is a manipulator, who lies for a living. Instead, it presents the inevitability of the corruption of ideals in the absence of a rock, like Jesus. Be warned about The Ides of March!