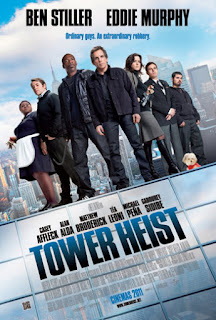 Occupy Wall Street, even Occupy Portland, has been center stage over the last few weeks. Clearly the idea of the 1% owning so much of the country’s wealth while most are swamped in debt with no job to provide any income, is anathema to many people. It is all those people, except the 1%, who will enjoy this film. It is timely comedy for this era.

Don’t expect too much though, it is full of plot holes large enough to drive a Ferrari through. It is mostly mindless entertainment, a screwball comedy that disengages the mind. Yet a study of the two main characters will bring some payoff from this heist.

Arthur Shaw (Alan Alda) lives in a penthouse apartment atop the grandiose apartment building called The Tower in the heart of New York. A suave and sophisticated financier, he is nonetheless a Ponzi schemer in the mold of Bernie Madoff. He lives like a king looking down on the minions whose money has made him a success.

The simple Joes who work at the Tower are unaware that Josh (Ben Stiller), their manager, has invested all their pension money with Shaw, who has promised to triple their portfolios. When Shaw is arrested on securities fraud, all his money is frozen by the FBI, and it is likely that their pensions have vanished with the wind. 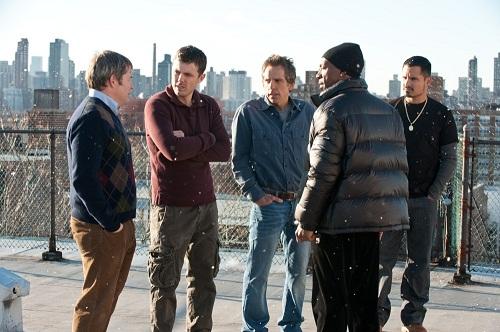 Rattner takes the first half hour to build his array of characters. He has some excellent comedy stars, many making comebacks of sorts, to work with. Alongside Stiller, who is excellent marshaling his troops, is Eddie Murphy as Slide, an ex-con thief, Matthew Broderick as Fitzhugh, an evicted tenant, Michael Pena as Enrique, a new employee, Casey Afleck is Charlie, Josh's brother-in-law, and Gabourey Sidibe, as a Jamaican maid who possesses safe-cracking talents. These form the gang who will plan the caper. And there is Tea Leoni, as FBI agent Denham whose sentiments lie with Josh, even though she is sworn to uphold the law. Leoni shows that her comic talents are an underrated strength.

Once it is clear that the hotel employees have lost their pensions, and in some cases their life-savings, the film kicks into gear. When Agent Denham mentions to Josh over drinks that Shaw must have $20M stored secretly somewhere in the apartment, the plot is set. Josh decides to steal this from Shaw to return the pensions to the employees. He is a modern-day Robin Hood of sorts.

Josh is the leader, pulling each player into the gang. Where other caper movies, like the Oceans trio, focus on the capabilities of each of the members, here the gang are all incompetents. Even Slide is no real thief: he steals small satellite dishes from balconies to avoid felony convictions. What is endearing is the loose banter that develops between the gang as they plan the heist. This off-the-wall and tangential dialog is a hoot.

It is interesting to contrast the two main characters. Shaw is smooth and suave and totally heartless. He appears earnest and genuine, caring for those who serve him. But when the chips are down, he makes it clear that there is a gulf a mile-wide between him and the hired help. He cares more for his treasured car, a vintage Ferrari, than for the servants. They can be replaced, the car can’t. Moreover, his merciful offer to Josh turns out to be a mockery. Not only does he want to humiliate Josh, he plans to break his pledge to him and punish him mercilessly.

Shaw is a satanesque figure, a god of this age (2 Cor. 4:4). With so much wealth, he controls much in this world and curries favor with the influencers. People see him as one of the good guys, a winner who has pulled himself up by the bootstraps, a true American hero. We love people like this, because we dream we can be like them. But would we be as heartless? Satan seeks to deceive, as he did from the beginning (Gen. 3:13), and destroy (Jn. 10:10). Would we be like that if we rose to a position like Shaw had? We hope not, but can we be sure? Appearances can be deceiving.

Josh, on the other hand, is a hard-worker, almost a work-aholic, who lives to serve and cares about those under him. He rises early to prepare himself for his work. He sets the bar high and expects his staff to follow his example. He is a little like Jesus, the greatest servant-leader who ever lived. Jesus cared, and cares, about those around him. In fact, he came as a person so that he could save us from our sins. Jesus existed in the trinity with God the Father and God the Holy Spirit (Jn. 1:1) in the highest penthouse ever, overlooking all of creation! He had that position, not by screwing others but by dint of relationship. But he cared more for us than for his position. And so he humbled himself and took on flesh for us (Phil. 2:5-9).

The end, which I won’t reveal, underscores Josh’s commitment to his gang and to his staff and his willingness to serve them. He was not in it for himself, to become rich. He wanted to see justice served. Sometimes we must take justice into our own hands to do this, but when we do we must be ready to count the cost.