The Way -- choosing a life, living a life 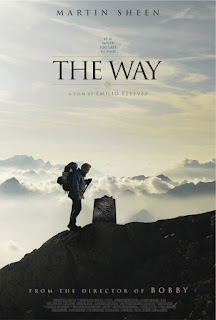 One person embarks on a 500 mile trek and meets up with three others along the way. They form a love-hate relationship and share some of their personal struggles along the journey. This sounds like a slow and boring movie, especially given the frequent shots of silent striding. Yet, under the sensitive helm of writer-director-producer (and even actor) Emilio Estevez, The Way is actually a poignant and moving (pun intended) film that engages those who want to think about their films.

The story centers on Tom Avery (Martin Sheen, Emilio’s real-life father), an ophthalmologist living in California. His wife dead, his estranged son Daniel (Emilio Estevez in more of a cameo role) has gone to France to walk the Camino de Santiago, or the Way of St James the Apostle. This 500 mile trek is one of the most famous Christian (or Catholic) pilgrimages, going from St. Jean Pied de Port in the French Pyrenees to Camino in Spain. Daniel has turned his back on his PhD program to seek real-world adventure and to live life, to travel and gain experience he can use later.

When Tom gets a call from France, he is informed Daniel died in a storm barely out from the start of his trek. Cancelling his appointments, he goes to France to claim the body, and while there decides to walk the camino with the cremated remains of his son. Wearing his sons gear, Tom begins an unplanned trek to complete what Daniel started. He is bearing not only the box of Daniel’s ashes, scattering them as he goes, but his grief and the bitterness of estrangement.

Estevez shows up in a few scenes, notably at the beginning when Tom is driving Daniel to the airport, to establish the difference between father and son. He shows up later along the journey but only in Tom’s imagination, to either challenge or encourage Tom in his progress along the way.

And along the way Tom picks up a rag-tag trio of misfits. First there is Joost from Amsterdam (Yorick van Wagenngen). Carrying a portly beer belly, he is ostensibly traversing the camino to lose weight. His collegial congeniality and constant patter is diametrically opposite to Tom’s no-nonsense and purposeful manner. They are chalk and cheese. Then there is Sarah (Deborah Kara Unger, The Game), an acid-tongued Canadian with an attitude. She is walking the way to give up smoking, seemingly ready to put her last cancer-sticks at the feet of the statue of James in Camino. Finally, they meet Jack from Ireland (James Nesbitt), a high-strung writer suffering from writer’s block. He is along to find inspiration and unplug his writing. These comprise the main players in this plot.

Some have compared this movie to The Wizard of Oz, with Tom taking the part of Dorothy, finding himself in a land that is not California. The way of Saint James becomes the yellow brick road. The three trekkers parallel the cowardly lion (Sarah), the tin man (Joost) and the scarecrow (Jack). But unlike that earlier classic, when Tom gets to Spain he finds no Wizard, just a church with a statue. But the journey does enable them to attain personal transformation, just like Dorothy’s friends.

One obvious theme is grief. Although not dwelling on this, it is evident that Tom is processing his grief and his loss through finishing up Daniel’s project. He deals with this through much solitude and inner reflection, pushing people away with his gruff and determined manner. But he eventually opens up and shares with those around him.

Bereavement is sadly a fact of life. We all deal with grief differently. Some process alone; others need to talk it out with family and friends. All need to walk through it. And walking is what Tom does. Allowing himself to feel the pain of the lost relationship, he finally comes to terms with how he pushed Daniel aside while he was alive.

The second theme emanates from this point. In the early scene of Tom driving with Daniel, Daniel tells him, “You don’t choose a life, dad. You live one.” This is the core of the movie, as is clear from the tag line. There is a difference between choosing a life and living a life. The former is passive, putting the person on the outside. The latter is much more active, engaging with life and all its facets both positive and negative. Tom was choosing his life, playing golf, treating patients, but not making time to do things he wanted to do, like spend time with Daniel.

How often do we put up the excuse of not doing something now because we are too busy, or saving up for something in the future? If events conspire to throw us a curve ball, like an accident or a tragedy, we lose that future opportunity and lose the gift of life in the immediate.

Jesus told us he is the life we need (Jn. 14:6). He also told us he came to offer us an abundant and full life (Jn. 10:10). But he also warned us that the person who focuses on the present can find it all taken away in an instant (Lk. 12:20) . James told us the same thing, that we don’t know what tomorrow will bring (Jas. 4;14). Although there is a place for planning for the future, there is a clear calling to enjoy life in the present, as there are no guarantees. This is living life, rather than choosing life.

There are a number of funny scenes, including a reference to Psycho. One of my favorites is when Tom loses his backpack when it falls into the river. His fear of losing his gear and his son's remains are paramount and he is willing to risk everything to get them back. Are we willing to risk all we have to gain what we really need? The second scene is when he, in a sense, loses his leadership position in the group.

Having got drunk and shared his opinions about the other three, his arrogant attitude finally spews out. He thinks himself so much better than them. But he finds himself humbled by his predicament and this humiliation leads to a humility that surfaces in allowing others to leave this stop in the lead. Internal transformation cannot really take place until we reach such a place of humility, and it sometimes takes external humiliation.

At the end of the journey, these four peregrinos actually find themselves transformed, but not in the way they spoke about. Their change is all internal. The outward behaviors were smokescreens (literally for Sarah) that were hiding their real problems and fears. Ultimately, the closing scenes point out that they had to walk this path to face their fears, verbalizing them in some cases. By facing them, they came to accept themselves. This did not necessarily result in external transformation, but the change within was much more powerful.

Accepting ourselves is a powerful concept. We can berate ourselves, punishing ourselves for our mistakes and our sins. We can put our inner critical voice on loop-mode, and constantly listen to this negative, demanding and demeaning talk that brings us down and leads us to defeat. On the other hand, when we accept who we are, turn our sins and ourself over to God, and embrace his loving acceptance, self-acceptance will follow. God already knows all our sins. God already knows our inner secrets. If he can love us, if he has already paid the penalty for our sins in the death of Jesus, we can experience the freeing power of forgiveness. Then accepting ourself allows us to live life now, instead of seeking punishment and self-immolation. Instead, Jesus is our sacrifice, and now he is our life.

What is interesting about The Way is that none of these four travelers are seeking God. None find him in an outwardly saving sense with traditional fanfare. But they seem to find a sense of the divine. At the climax in the church, all four stand and ponder the worship service and one breaks down, weeping. He clearly has a divine encounter. I think the others do too, though in their own way, just like we do.