Rachel Getting Married -- love and self-forgiveness Rachel Getting Married is really about Kym (Anne Hathaway). Kym is a substance-abusing junkie who has been in and out of rehab for years. Now, nine months into her latest stint, she is allowed a weekend of freedom so she can return to her father's Connecticut home for the wedding of her sister, Rachel (Rosemarie DeWitt).

Hathway, in this central role, comes of age aas an actress. Gone is the likeable but banal princess (The Princess Diaries). Instead, Hathaway submerges herself in the skin of an addict, and we forget the actress and see a person who is both desperately needy and filled with self-loathing. She is a loose cannon who cannot be controlled. Her nomination for an Oscar for this performance was indeed well deserved.

Rachel is getting married to Sidney (Tunde Adebimpe, a real-life singer), a black musician, in a traditional Indian ceremony in the family home. Filled with friends who are musicians, there is constant music in the background and a free-flowing sense of peace and joy. Into this dynamic comes Kym and immediately there is tension in the air, tension due to long-simmering issues that lie unresolved and unspoken. As these rise to the surface in unexpected ways, we find ourselves laughing at one moment and crying at the next. It is a bittersweet wedding movie, both hilarious and heartbreaking.

Demme (The Manchurian Candidate, Silence of the Lambs) has surrounded Hathaway with some veteran actors and some unknowns. Bill Irwin is Paul, Kym's remarried father, and Debra Winger is her remarried mother. Demme also chose to give the cast a lot of freedom and shot much of the movie in single takes, simply following them around with cameras. In this way he gives the film an intimate film; it is as if we are actually present in this house sharing in this very personal wedding. Since one of the characters has an ever-present camcorder and Kym often talks into this camera, the film at times feels like a home-movie. 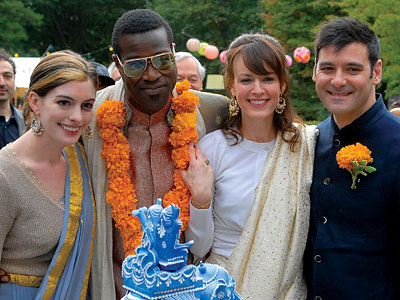 Weddings, like anniversaries and reunions, bring out the best and worst of families. This one is no different, except that there are more skeletons in the closet. In the rehearsal dinner we see the best. Rachel's white upper-middle class family mix and mingle with fiance Sidney's large black family. The room is filled with laughter. Various ethnicities blend together, food and wine is enjoyed, toasts are made, memories savored. One critic has called this a picture of heaven. Certainly, in heaven people of all colors and nations will come together as one in the body of Christ. We will enjoy being part of one family worshipping one God. The Bible even portrays our relationship to Jesus as a marriage (Eph. 5:25-32; Rev. 19:7), and the marriage feast will be one to behold and be enjoyed in heaven (Rev. 19:9). The grace, acceptance and love present there is illustrated in this rehearsal dinner . . . at least until sourpuss Kym gets up to make her speech. 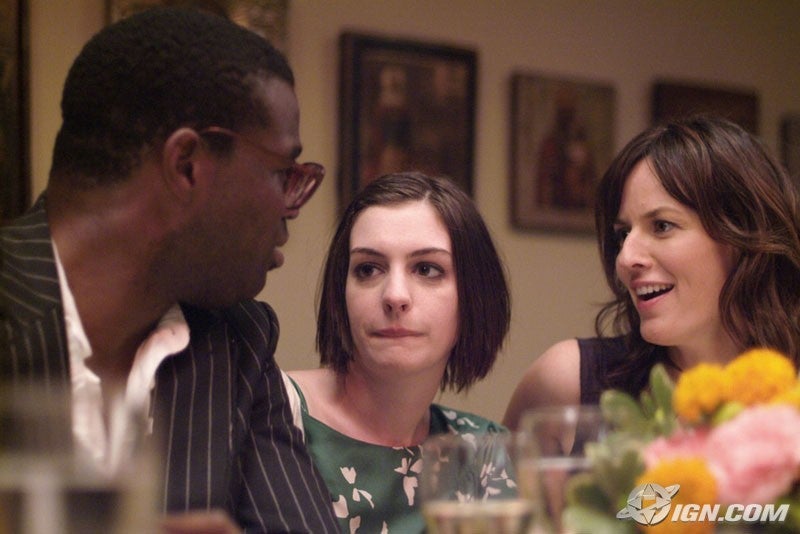 The screenplay by Jenny Lumet, daughter of film director Sidney Lumet, is her first to be filmed, but it is sharp as a tack, bringing a brutal honesty to a dysfunctional family's dynamics. One scene highlights male competetiveness as a means to bonding and is based on an actual event involving her father and actor Bob Fosse. Rachel's husband-to-be Sidney looks in the dishwasher and sees it is poorly loaded, overflowing but with the potential for room if re-loaded. He claims he can load it better than Paul, his soon-t0-be father-in-law. That is a challenge any self-respecting man will not refuse. So, the stakes are set: to load the dishwasher inside two minutes. Sidney does his bit amidst spectator cheering. But Paul is the master-loader, and when it is his turn he not only fills it but there is room to spare. Indeed, there is a right and best way to load a dishwasher . . . as I often tell and show my family. (Is it a male thing about loading the dishwasher?) And Sidney and Paul somehow mystically become closer as a result of this competition.

At the end of the competition, though, Kym, in trying to help brings to the forefront one of the family skeletons. In less than a nanosecond the mood of magic turns melancholic. Family dynamics can be so fragile. A silent look, a whispered word, an innate object, such things can trigger bitter recollections that can ruin the moment, with others outside the family circle not comprehending what has taken place. Such are families.

One of the unspoken issues in this family is favoritism. Paul clearly dotes on Kym at the expense of Rachel. And it has its negative effects. For Kym, it feels like overcontrol and over-protection. To some degree she is running from this seeking her own personal space and freedom. To Rachel it feels like a love that has been stolen from her. Paul, as the father, is blinded to the consequences of his actions and sees none of this. At least until it is bluntly and rudely brought to his attention.

Favoritism can raise its ugly head in the most normal of families as here. In the Old Testament the story of Joseph and his multicolored coat is a story of favoritism and jealousy (Gen. 37-50). Jacob loved Joseph more than his other sons and gave him this prize cloak. But the bitter siblings chose to sell Joseph into slavery in Egypt, an act that was planned and used by God for the good of the nation (Gen. 50:20), but which caused pain and suffering to Jacob for years. When we commit favoritism as parents we are planting seeds of sibling strife that may be invisible to us but will likely germinate into bitter fruit in later years.

Such bitter fruit needs to be dealt with. Forgiveness is the answer. Though she attempts a generic repentance to her family, Kym cannot so easily make amends and receive forgiveness. And with forgiveness, there are three parties involved: the victim, the culprit and God. Kym struggles with all three.

At a 12-step program meeting we see Kym admit to her addictions and give a moving personal testimony:

Sometimes it is easier to forgive another person than it is to forgive ourself. Then while we remain in a state of self-unforgiveness we find it hard to accept that God could forgive us. After all, if we won't forgive ourself, why should God? But in doing this, Kym is actually putting herself above God. If God says he forgives us we need to accept this and also forgive ourselves. By supplanting God, Kym is playing the part of the martyr, the person whose sins and crimes are so terrible that she cannot accept forgiveness. She has got her logic twisted. She can't forgive herself because she cannot accept God. If she did the latter, she would find the freedom to do the former. How many of us are also in this position, like Kym holding onto self-loathing and pushing God away? Maybe it is time to move to God first.

As much as Rachel Getting Married is a picture of family dysfunction, it is still a celebration of love and hope in the form of Rachel's marriage. Surrounded by musicians, Sidney breaks into acapella song to Rachel as part of his wedding vows. A beautfiul moment, it reflects the magical wonder of a wedding. Two people joining themselves together to form a new union with the hope of a lifetime of love. Cue the tissues. 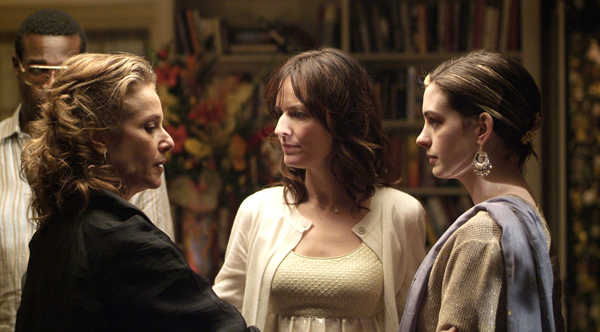 Indeed, the film leaves us thinking about love. Kym, in another emotional outburst, pours out the question that has been burning a hole in her heart: "Did I sacrifice every bit of love I'm allowed for this life because" of the incident in her troubled teens. She is crying out for love. Her neediness is like a choker slowly strangling the life and hope out of her. She wants to be accepted by her sister and mother, she wants to be loved by her family.

We all want to be loved. Weddings remind of us our own families and marriages, whether loveless or loving. We all need this unconditional acceptance. We can get this from Jesus. He loves us and accepts us, even when we won't accept ourselves. Will we let him? Will we embrace this love and be part of his bride?