Until this week I had never heard of Nick Vujicic. This Australian, born without arms or legs, is a strong follower of Jesus. My kids had heard of him and seen some of his inspirational and motivational YouTube videos.

Then I got an email from Waterbrook Publishers, who I periodically review books for. They are releasing his new book, Unstoppable, in October. After looking at his video (http://bit.ly/NxKhEa) and reading the first chapter of this book (http://multnomahemails.com/wbmlt/pdf/SneakPeek_Unstoppable.pdf ) I can't wait to get a copy. His life of faith and joy is a testament to the power of God available in all circumstances. If you're struggling in your faith, perhaps you should get a copy, too.
at 3:07 PM No comments:

The Grey -- fear and faith, and their opposites

"Once more into the fray. Into the last good fight I'll ever know. Live and die on this day. Live and die on this day." Life is full of battles resulting in suffering and pain. How do we deal with these? Who do we turn to? Are we afraid? Do we have faith in God? This poem forms a central motif underscoring the theme of faith / faithlessness and fear / no fear that writer-director Carnahan explores in this atheistic and existential film.

We meet the protagonist, John Ottway (Liam Neeson) through his opening voice-over: "A job at the end of the world. A salaried killer for a big petroleum company. I don't know why I did half the things I've done, but I know this is where I belong, surrounded by my own. Ex-cons, fugitives, drifters. . . Men unfit for mankind." He has his personal demons, ones that have led him to the brink of the abyss. It is when he meets the protagonist, the grey timber wolf, that he draws some strength and hope of personal redemption.

A wolf-killer to protect the gnarly and nasty oil-workers, Ottway boards a plane with men going home on leave. He has no home to return to, since his wife has left him. But when the plane crashes in the Alaskan tundra in the middle of nowhere, he finds only seven survivors. He emerges as leader.

We find his lack of faith early as he deals with a dying survivor still strapped into an airplane seat. Blood gushing from his belly, the man looks at Ottway with pleading eyes. But Ottway tells him the truth: "You're going to die." Then he tells him there is no heaven, just a warmth as death overtakes him and brings him into the state of non-existence. As touching as this scene is, it underscores the hero's problem: he has no one to turn to. He (and we) will come back to that later.

With this death over, only seven remain. Soon after, Ottway discovers the hard way a grey wolf, and there are more. They are in the wolves' den. They have two choice: remain at the crash site and make a stand, or try to escape to the forest and beyond. With no hope and no resources at the broken airplane, they decide to flee. And they set up the rest of the film: hunted and hunters. Like many of these films, we will see their pack whittled down slowly, one by one, by the wolf pack.

Carnahan gives the movie a bleak wintry look, all greys no color. Add to this the graininess of the film and we can almost feel the sub-zero temperatures of this barren wasteland. It paints a visual image of the hopelessness and faithlessness of the hero.

Of the other men, two stand out as diametric opposites: Diaz (Frank Grillo) is the arrogant womanizer and alpha-male wannabe, while Talget (Dermot Mulroney) is a family man with a faith in God. Their contrary natures provide the means for a debate on God.

Sitting around a fire these men fall into the sort of male sharing that accompanies camping. Like the wolves surrounding them, Diaz challenges Ottway to see who should be the leader, the alpha-male of this pack. Ottway has already confessed he is terrified. Diaz, in contrast, declaims a lack of fear. He is not afraid.

Should a leader be afraid? In flashback dream-like sequences, we see Ottway's wife constantly telling him, "Don't be afraid." But Ottway is afraid. He is not ashamed to say this. He faces reality and his fear, tempered though it is, allows him to avoid the perils of false bravado. A leader living in fantasy-land is of no use to his followers.


When is appropriate to be afraid versus not being afraid? Obviously there is a sense of fearing imminent danger, as the wolves posed to these men. But the Bible is full of God's command to "be not afraid". In particular, Jesus says, "Do not be afraid of those who kill the body but cannot kill the soul. Rather, be afraid of the One who can destroy both soul and body in hell" (Matt. 10:28). There is one to be afraid of, and he is the Almighty. This fear is a holy and wholesome awe of the one who creates and judges, and it is the beginning of knowledge (Prov. 1:7) and wisdom (Prov. 9:10).

The predicament of the men causes Talget to bring up the existence of God and the meaning of life. In the midst of suffering and death, it seems a reasonable question, but the rest shoot him down with laughter calling his faith a "fairy tale."

Later, when Ottway is left all alone, he looks up into the sky and calls out to God for help. He wants it now. When no answer emerges, he shrugs and says quietly to himself, "Fine, I'll do it myself." This scene is the pivotal point in Carnahan's proposition that there is no God, and sets up the gripping finale of man vs wolf, two alpha males in nature without a maker. 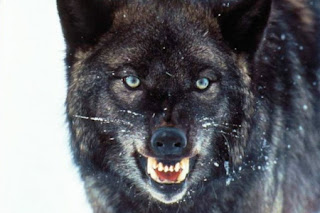 Many men have to come to believe in God in "foxhole-faith moments", times of danger when they seek help from God. Others, wanting immediate faith gratification, find it wanting and become hardened in heart, set against a God who does not answer on-call. Can we demand our will be done on earth at God's beck and call? Can we really expect that a single, simple prayer, like that of Ottway, will result in a miraculous moment? We want to believe and expect this. But such expectations are likely to be dashed, as Ottway's were. We can affirm that God hears our prayers and answers them in his way. But his ways are higher than ours (Isa. 55:9) and we cannot understand the mind of the Lord (Rom. 11:34). He has higher purposes for us, even if they include suffering and death.

The Grey is an intense and engaging action film. Despite some gaping plot-holes (like surviving falling into ice-cold river without a way to dry off clothes or regain body-heat), it pulls us in, but does not offer a Hollywood ending. This is no Disney film. But its message is clear and for those of us who follow Jesus, the grey dissolves into black and white. We believe in a God who is there, even if Carnahan and his hero don't.