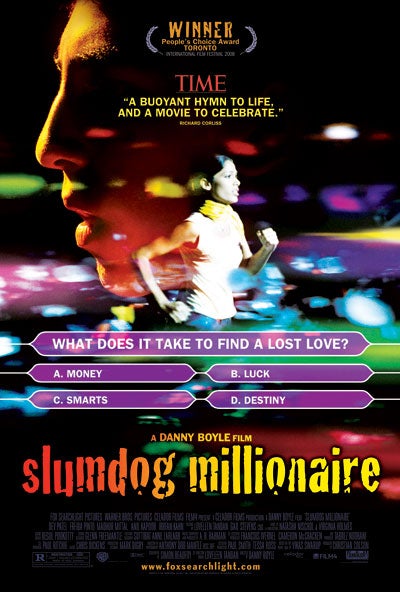 I had free tickets to see this at a pre-screening in Portland in December when this was an unknown, almost "straight-to-DVD" movie. Then the blizzard of 08 descended on us and I missed the opportunity. Thereafter the awards juggernaught took off and Slumdog Millionaire started collecting trophies like a squirrel collects nuts in the fall. Sweep, baby! In fact, this is the first film since Spielberg's Schindler's List in 1993 to collect the top three trophies, Best Picture, Best Director and Best Screenplay, at the top three awards ceremonies: the Golden Globes, the BAFTAs (British Oscars), and the Oscars.

Jamal Malik (Dev Patel) is an 18 year-old orphan from Mumbai who is one question away from winning 20 million rupees on the Indian version of "Who Wants to Be a Millionaire" (pronounced 'millonaire'). But Regis-wannabe host Prem Kumar (Anil Kapoor) suspects him of cheating and he is arrested and subjected to police torture. As the Inspector (Irrfan Khan) says, "What can a slumdog possibly know?" Here is the crux of the movie. How can an uneducated kid from the slums possibly do better than the lawyers and doctors who compete but never get this far. A touch of judgmentalism? For sure. A hint of jealousy? Perhaps. Slumdog Millionaire unpacks the answers to a) how he can answer the questions correctly and b) why he wants to do so.

Slumdog is told in episodic fashion, starting when he was a little kid in the slums playing cricket with his older brother Salim on the runways of the local airport. In and out of trouble, they are like Athos and Porthos, two of the three musketeers. But Jamal is the tender-hearted of the two, while Salim is tough and street-wise, always looking for quick cash. When they are orphaned the two must make it on their own with no home, no money and no friends. 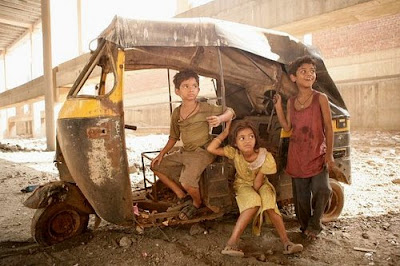 Another orphan, Latika, comes along and completes the trio. Latika and Jamal become fast friends, destined for more. But life is hard without parents. Moving to the city's huge trash piles, these three eke out a stinky living until a "savior" comes to rescue them and the other kids. But this is no true savior, this is a gangster who wants to exploit these kids as beggars for his own ends. It is here in the orphanage that Salim learns to use force to survive.

Escaping, Salim and Jamal have to leave Latika behind when they climb aboard a train going anywhere but where they are at. Thus begins their life of petty crime. Stealing, lying, cheating to make money for food, they grow up alone. But Jamal cannot forget Latika. He is smitten and he believes it is written that they will wind up together. Through circumstances they come to a place where Salim makes a fateful choice. And Salim and Jamal depart on two different roads.

Salim takes the path downwards becoming a gangster like those he escaped from. For him, the power of the gun makes him a man. But this path will eventually lead to death and destruction. Biblically, such a life spirals down to the pit (Psa 55:23). In contrast, Jamal is driven by the power of love, of hope. He chooses a path of humility and honesty. Working as a "char-wallah," a tea-boy serving the Indians working at a call center, he speaks the truth and earns an honest wage. Such a way leads to the true path, the narrow way of Jesus, the way of life (Matt. 7:13-14). Theirs is the contrast of brotherly characters and brotherly destinies.

Boyle has done a fine job of making a film of the slums of India that is both gut-wrenching and grittily realistic while still inspiring hope. Contrasting the squalor and hopelessness of the slums and trash heaps with the bright, almost vibrant, colors of the Indian clothes and fabrics, Boyle highlights the humanity present even in such deplorable conditions.

Slumdog Millionaire is tough to watch in places. It reminded me a lot of City of God, the film portraying the Brazilian slums and the gangs that owned that hell-on-earth. But, City of God was overly vicious and violent, while Slumdog is more restrained. Yet, it still portrays the violence of religious intolerance between the Hindus and the Muslims. There is imagery of people being brutally beaten and burned alive, the cruel mutilation and exploitation of innocent orphans, and the torture of Jamal to seek a confession. Yet these are not gratuitous; they add to the story and help to communicate the reasons for the choices the two brothers make. They show the poverty and its implications of life in this rarely-seen part of the world.

At one point the Police Inspector tells Jamal, "Money and women. The reasons for most mistakes in life. Looks like you've mixed up both." But Jamal's cool and nerveless manner in the hot-seat under the TV lights is because he is not motivated by money. For many, the allure of winning the millions on this show is escape, an escape from a confining and constraining way of life. But, in contrast, Jamal is merely driven by hope, the hope of finding his life-long love, Latika.

Danny Boyle has used hope and money as two themes in several of his movies. In his debut film, Shallow Grave, it was the criminal's hope of keeping the cash and finding a new life. But that hope was shallow and degenerated with the disintegrating relationships. Millions saw hope come to the working-class boy who found the money. But in Slumdog the hope is not for money but for love. The money is simply a vehicle to get to the girl. Love trumps loot.

Indeed, hope is a native emotion, a primal urge, a guttural drive. Without hope, the strongest die. With hope, even the weak can survive. Hope is an anchor for the soul (Heb. 6:19). Hope keeps an orphaned Indian going when he is being tortured. Hope keeps us coming back to a dead-end job. Hope for the future enables us to see beyond the daily grind to a future with our Lord in heaven, (Phil. 3:20) a future that awaits all who follow Jesus. 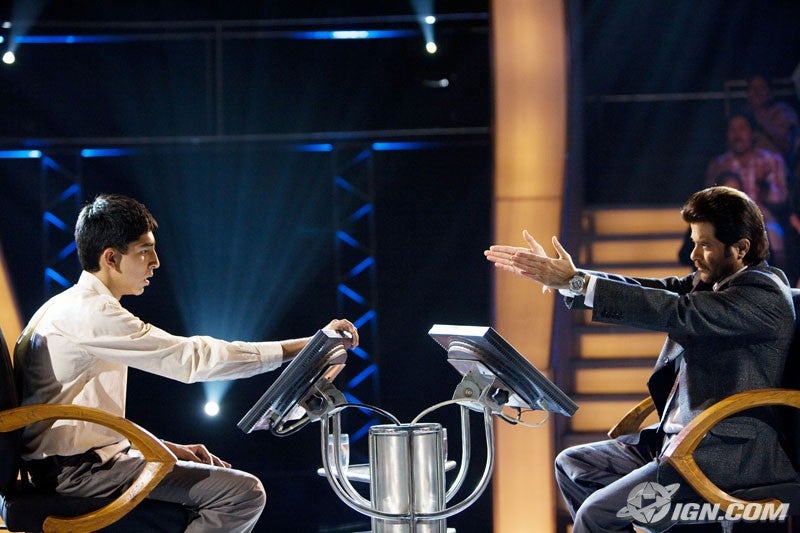 Ultimately, Jamal, a Muslim, believed in destiny. He believes "it's written," namely that he and Latika (Freida Pinto) would be together forever. Destiny, the irresistible course of events, is his dream. As a follower of Jesus, destiny is another term for the sovereign will of God (Rom. 8:28). God is in control of all events, some of which he has foretold in the prophets. The rest cannot be known ahead of time apart from his special revelation.

Slumdog Millionaire, for all the hope it inspires, left me thinking about this idea of "it's written." This is a phrase that occurs at least 70 times in the Bible. In each case it is referring to the written revelation of God. He has revealed himself through the Bible. These revelations are the truth. Where they are prophecies they have been fulfilled or they will be in due time. As Jamal had faith in the idea of his destiny being written, we can have faith in the sovereign God and his written word. We can have hope.