Lord, Save Us from Your Followers -- Radical Compassion Required 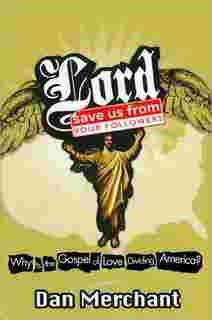 If 9 out of 10 Americans believe in a god, and 75% of Americans claim to be Christian, why is America so polarized? Why is the gospel of love dividing America? This is the question that filmmaker Dan Merchant sets out to answer in this entertaining and funny independent documentary.

Merchant took to the streets of the cities in America as "bumpersticker man," wearing a plastic suit emblazoned with dozens of bumper stickers and Christian-fish stickers, to talk to the average man and woman. Engaging them in conversation, real conversation not proselytizing, he heard what average Americans really think. It's a mixed bag. When asked about Jesus, most people responded in broad terms of love, forgiveness, belief, even unbelief. These are the very people He came to love.

Merchant also sits down to interview some big names, such as Tony Campolo, Al Franken, Dr. John Perkins and Lars Larson. Though he only gives very short segments from these interviews, they are thought-provoking and leave us wishing we could hear more. In one segment, Campolo cites Augustine, saying "My mother is a whore" to refer to the unfaithfulness of the mother church. Though she is unfaithful it is through the church that he (and we) hear the gospel of Jesus Christ. And it is through the love of Jesus Christ and His sacrifice for our sins that we come to receive His forgiveness.

Speaking of forgiveness, Merchant took a cue from Don Miller's book, Blue Like Jazz, where he and "Tony the beat poet" set up a confessional booth in Portland's Reid College campus to confess their sins to the students instead of the other way round. Likewise, Merchant set up a booth on the Portland waterfront park during the Gay Pride week festival. Inviting gays and lesbians in, he confessed the church's and his personal sins of judgment and uncaring attitudes. In so doing, he opened up genuine conversation. It was a beautiful picture of humility. No Christian conversions occurred apparently, but conversation happened. And conversation is the forerunner to thoughtful response.

This was a contrast to the extended scenes and interactions around Battlecry, a Christian movement in San Francisco aimed at teens. When the organizers appeared on the steps of City Hall, the same steps where gay married couples appeared earlier, they were met with an anti-Christian gay rally. This, in turn, caused Christians to decry the gays for their lifestyle. It was a classic polarizing and dividing event. Merchant, meanwhile took time to talk to some of the ralliers on both sides. One in particular, Sister Mary Timothy of the Sisters of Perpetual Indulgence, a drag-queen nun, shared her/his views to Merchant as he was actually heard. Respectful listening created space for views to be shared.

Camping on the concept of the culture wars, Merchant created a "Family Feud" game called "Culture Wars" where he pitted young conservative Christians against liberal media personalities. The right-wingers were blown away. They could not pull themselves out of their rigid thinking to understand how others thought. To prove this was no accident, Merchant even repeated this "battle" with college students. The result was even more one-sided, with the Christian students gaining not even one point! But it reemphasized that the ostrich mentality will win no friends and does nothing to further the gospel.

If the first two acts show how some Christians are dividing the country, two extended scenes stand out to communicate the way the gospel should be "preached." The first was the weekly bridgetown event in Portland, where volunteer Christ-followers come out to wash the feet and cut the hair of homeless people. Amidst a spirit of genuine love, they cared for and fed these men and women. They touched their spirits, and they touched their bodies. Where most people shun them, refusing to even see them, like the lepers of Jesus' day, these volunteers preached the gospel of love without words.

And then there was the mission to Africa to care for the African kids who have no food. An international compassion ministry partnered with a non-Christian rock-n-roll radio station to go show Jesus' love. The radio station director who went over was a non-believer, and came back convinced that this was not only presenting America in a benevolent manner to these needy kids, but was an expression of the love of Jesus Christ. This is the gospel in action. This is the true gospel, recognized for what it is -- the love of Jesus caring for people who are marginalized.
Lord, Save Us from Your Followers is not a perfect film, but it is a thoughtful and challenging one. As a follower of Jesus, am I listening to people who are different from me and my church friends? Do I really know what they think? Do I really care about them? It's easy to listen enough to have an opportunity to argue, but that rarely wins friends, let alone enemies. Jesus called us to radical compassion. And that requires radical conversation. Anyone can love a friend. Jesus tells us, "Love your enemies and pray for those who persecute you" (Matt 5:44).
Lord Save Us left me thinking about pairs of opposites: conversation versus debate; compassion versus judgment; love in deeds versus love in words; fusion versus faction; dependence versus division. Too often I find myself on the right side of these pairs, not the left. I want to be transformed by the gospel of love and be a transformer for Jesus with His love in this world. I want to move from the right to the left. I think that is what Dan Merchant wants to see happen.
Copyright 2008, Martin Baggs
at 7:00 AM