It's hard to find a good comedy these days. Recent offerings seem raunchy or rude (think Will Ferrell in Blades of Glory or most of his work), acerbic and caustic (think Jack Black in Margot at the Wedding) or simply unfunny (consider Luke and Owen Wilson in The Wendell Baker Story). To find an award-winning one is even harder, and it requires regressing a decade or two.The Princess Bride, released in 1987, is a perfect example.

The Princess Bride is a very funny Rob Reiner movie despite hokey effects (the eels and Rodents of Unusual Size are odd by today's standards) and average acting. Viewed 20 years later it is still hilarious with memorable lines and notable scenes. Who can foget the classic line, "Hello. My name is Inigo Montoya. You killed my father. Prepare to die." With heroes and villains, giants and wizards, it is a fantasy and fairy-story. Indeed, it blends genres to offer a satiric comedy, spoofing the swashbuckling Errol Flynn and Basil Rathbone movies of the 30s. It even pointedly references the great Hitchcock classic, The 39 Steps, with a six-fingered man.

Using the device of a grandpa (Peter Falk) telling a 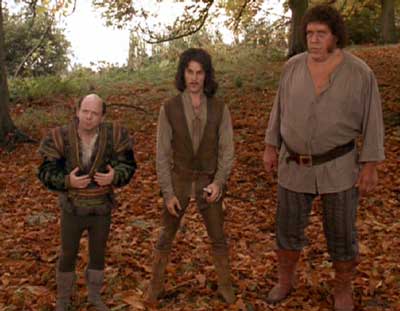 story to his sick grandson (Fred Savage in an award-winning role), Princess Bride is introduced as simple entertainment. The plot is simple: Westley (Cary Elwes) is a farm-boy who loves the beautiful Buttercup (Robin Wright in her first starring role), a higher-ranking girl from his village. They fall in love, are separated by death and must be reunited.

This is a story of true love. When Westley leaves to find the fortune he will need to marry Buttercup he is killed by the "Dread Pirate Roberts." Five years later, she is betrothed to the scheming Prince Humperdinck (Chris Sarandon). But there is no love there. Indeed, she is kidnapped at his doing to initiate a war. Her kidnappers are the marvellous trio of Vizzini the brains (Wallace Shawn), Fezzik the brawn (Andre the Giant), and Inigo Montoya the finesse (Mandy Patinkin). Buttercup is later re-kidnapped by the pirate, and rescued by Humperdinck. Formulaic, it is not. Surprises abound, and the dialog is witty, even riotous.

When the pirate is revealed to be none other than her "dead" beloved Westley, she realizes her true love has returned and there is none other for her. Yet, as she saves him from death at the hands of her fiance, the evil prince determines to torture him in the pit of despair then kill him. Humperdinck knows neither love nor mercy; he desires power and fortune. Amidst the ensuing adventures, there are several rib-tickling cameos. Mel Smith appears as an albino torturer. Billy Crystal is superb as a sacked miracle worker, Miracle Max. He is old and wizened, a cynical old wizard. When asked to bring Westley back from the dead, after he is killed in the pit of despair, Miracle Max wants money and a good reason. Only when he hears that Westley is Princess Buttercup's true love and his "resurrection" could bring humiliation and defeat to Humperdinck, does he agree. Yet, he has a strange perspective on true love: "Sonny, true love is the greatest thing, in the world-except for a nice MLT - mutton, lettuce and tomato sandwich, where the mutton is nice and lean and the tomato is ripe."

Perhaps the funniest cameo of all is that of Peter Cook (former comedic partner of Dudley Moore) as the Impressive Clergyman. Employing the most impressive lisp in cinematic history, not duplicated since, he preaches a hilarious wedding sermon: "Mawage. Mawage is wot bwings us togeder tooday. Mawage, that bwessed awangment, that dweam wifin a dweam. . . . And wuv, tru wuv, will fowow you foweva." This is wet your pants laughing material.

The main theme of Princess Bride is true love. Westley's is a quest for the true love he found and "lost" and wants to regain. Nothing is too much in this quest. All can be sacrificed for this ultimate goal. And love is a quest worth pursuing.

But is the concept of a "true love" realistic and legitimate? Will this one love satisfy us through a life together? Certainly Hollywood movies such as this portray the romantic side of love, that of love as a young person's adventure. It does not show the aspects of love after 20 years, 40 years, 60 years, when looks fade, functions deteriorate, and memory disappears. Is love, even true love, strong enough to withstand these assaults? Some would say no, some may be uncertain. Experience of couples committed to one another would say yes.

Too often today love is seen as temporary, a pleasure to be enjoyed and discarded when something or someone better comes along. Love is viewed as a feeling that can change. Princess Bride reminds us that love, true love, is more than this. It is permanent. As Westley says to Buttercup when she unmasks him, "death cannot stop true love. All it can do is delay it for a while."

It is on this point that Princess Bride also unwittingly highlights the deeper significance of love. God is love and loves humanity more than we can know or even imagine. As we come to know and love God, we realize that our destiny is ultimately to be with Him in heaven. Death may separate us from our loved ones, but it is a bittersweet experience for a follower of Jesus, since it ushers the deceased into the presence of God Himself. Then when believing family members die, they too are brought into this place, and reunion occurs. In this sense, death does not stop true love, though it does delay it for a while for believing husbands and wives, parents and children. But even more than this, death hastens us Christ-followers into the presence of our one true love, Jesus himself. True love is indeed a worthy quest!