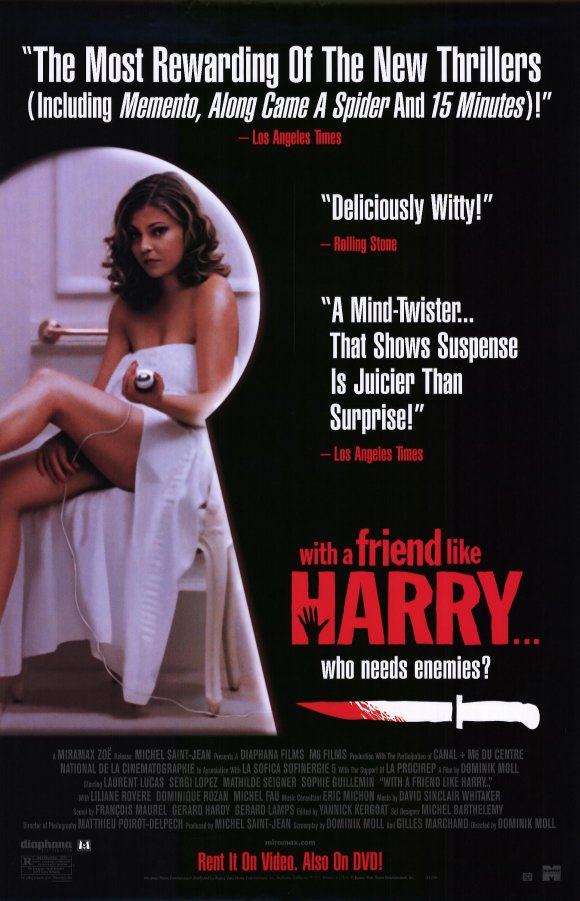 The movie opens with Michel (Laurent Lucas) driving his family in an old car en route to their vacation home. With no air conditioning, the three young girls are hot and cranky, whining and screaming from the back. Up front Claire (Mathilde Seigner, sister of Emmanuelle Seigner, The Diving Bell and the Butterfly) is tired and Michel loses it. He pulls off for a break at a highway gas station. It is there, in the men’s rest-room, that he meets Harry (Sergi Lopez).

Harry is everything that Michel is not: well-dressed, hair combed, cool and confident. He drives an air-conditioned BMW, not a beater. Recognizing Michel as an old school-chum from years ago, he greets him warmly. Though Michel cannot remember him, Harry remembers even the smallest of details from their time together. What a coincidence!

When he emerges from the bathroom, Harry introduces his beautiful but brainless fiancée Plum (Sophie Guillemin) to Michel and his family. Though they decline Harry’s invitation to dinner, Harry wheedles an invitation to Michel’s farmhouse for a drink. There, he recites from memory an old poem that Michel wrote for his school newspaper and has subsequently forgotten. Michel’s dormant literary talent is news to Claire, and she wants to hear more.

This French film layers on suspense slowly and carefully, mixing dark humor with tantalizing intrigue. We know something is up; Harry is too good to be true. He manipulates his way into Michel’s vacation home but he is creepy, with his midnight wanderings and his strange rituals.

Harry is a self-declared problem-solver. He is quick and decisive in taking action when he sees a need, offering concrete and permanent fixes.
Problem-solving is clearly a good thing, a skill worth obtaining. Far better to dispatch a dilemma than to whine and pout over it. In the Old Testament, Daniel was looked on as a wise man because, “I have heard that you are able to give interpretations and to solve difficult problems” (Dan. 5:16). But the solution must match the problem, and not create further problems of their own; else we are simply shifting the issue, jumping from the frying pan into the fire. Therein lies the difference between a wise man (like Daniel) and simply a man of action (like Harry).

When Harry begins to offer advice to Michel, related to his writing and his relatives, we begin to see a motive underlying his manner. Yet this motive is never really fleshed out. We don’t get to see beneath Harry’s charming exterior to his inner soul. We just see a well-to-do and wealthy sociopath who seems socially normal.

Early on, he buys Claire a new car, an air-conditioned SUV to replace their car that has broken down. When she complains and refuses, he points out that he has money and this is simply his way of solving their problem and removing another distraction from Michel. At the end of the film, we see Michel driving home in this vehicle. Claire is asleep, as are their girls in the back, cool and comfortable. Even Michel’s hair seems tidier and in place. He has the trace of a smile on his lips, and faintly resembles Harry. Michel has solved his problem with Harry in a way worthy of the man himself.

The film leaves us with this image, forcing us to reflect on how Harry-like Michel has become. It suggests we all have a trace of Harry in us. Biblically, the truth is we all have a sinful nature that is characterized by selfishness and separation from God (Isa. 59:2). We may solve problems but too often we do so in ways that move us further from the Lord. Only when we realize our deepest problem is our very sin nature (Eph. 2:1) and look to him for a solution can we move forward with a smile. We can never come to God until our sins have been dealt with, and this only through Jesus (Rom. 3:24-25). With a friend like Harry we will only get ourselves deeper and deeper in trouble. With a friend like Jesus (Jn. 15:14), we can find true escape! Which would you rather have?