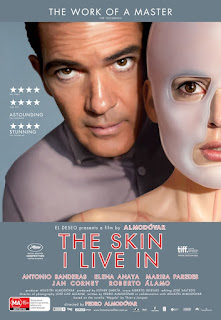 Almodovar’s latest film reunites him with star Antonio Banderas (Women on the Verge of a Nervous Breakdown). Twenty-three years on, Banderas still fills the screen with his handsome visage and physique. Unlike that earlier screwball comedy, this film is serious, deadly serious. This is a suspense drama, with rape and suicide as key plot points. Indeed, it is reminiscent of a somewhat perverted, sexualized Hitchcock film.

The film opens with a quiet and serene scene of a woman, Vera (Elena Anaya), in a leotard-like bodysuit performing yoga moves in a large studio apartment. She uses an intercom to request supplies from a maid, Marilia (Marisa Paredes, All About My Mother), living below. All seems calm and well. But we don’t know the whole story.

Almodovar uses this first scene to communicate the point that first impressions can be deceiving. We perceive reality but often see things only skin-deep. And these first impressions cause us to jump to conclusions. We prejudice our understanding in this way. And then having formed these judgments, we interpret correctly or incorrectly the ongoing story of reality through this grid. As the film continues we see the curtain pulled back on Vera and realize our first impressions were hugely wrong. As we move on, we meet Dr. Robert Ledgard (Banderas), a scientist whose wife died in the flames of car crash. Grief-stricken, he has dedicated his life to perfecting a synthetic skin, one that can withstand burns as well as cuts, and shields the lucky person from most pain. He works tirelessly in a private laboratory beneath his large secluded home. But are his motives as altruistic as they seem? The scientific community begins to question the bioethics underlying his discoveries when he shares them to a private audience.

To understand Ledgard’s motives, Almodovar takes us back 6 years. The slowly developing movement of the film takes us back not to the crash, but to its aftermath and its effects on his daughter. And like a true master, Almodovar takes us to the abyss, and then makes us look over the edge, throwing a twist so large it knocks us over the edge. Some may see it coming, and the clues are all there, but once revealed it casts everything we have seen before in a new and striking light.

A key theme emerges: identity. Are we defined by the skin we live in? If so, if we change that skin, do we change our fundamental nature and identity? Ledgard’s mad scientist experiments would have us answer affirmative to both questions. The new skin resists flame and that new skin on Vera, his flawless patient, provides her a new identity. Her identity is skin-deep.

Is this true? Is our identity only as deep as the cells in our skin, superficial? Surely not. Even if we change our skin, through grafts, we remain the same person. If we undergo surgery to change our appearance, we retain our DNA, we maintain our nature. We may even change our name, seeking to change our identity, but this does nothing to modify our character. Our innate personhood, our inherent nature is stable.

Identity is rooted in relationship, to ourself, our parents, our family, and our God. We know who we are even if we change our face, our name, our behavior. Much of our identity stems from our parents and familial upbringing. Even our name usually comes from there. But our fundamental identity, our uniqueness, comes from the God who formed us. Made in the image of God (Gen. 1:26), we are marred by sin (Gen. 3). Yet when we come to follow the Lord Jesus we find ourselves adopted back into the family of God; we are called “children of God” (Jn. 1:12). This is at the very heart of our identity. When we come to the heavenly city upon exiting this life, we will find entry dependent on identity and relationship. If we are a child of God through relationship to Jesus Christ, we will be offered access. If we not, we will be shut out. Once the twist is shown and the cat is out of the bag, a final theme emerges: vengeance. To be more exact, Almodovar forces us to consider the lesson that vengeance begets vengeance. Violence early in the film lays a path for violence throughout culminating at the climax.

The only true solution to vengeance is to absorb the earlier violence rather than repay it. Yet this carries a heavy cost: the cost of forgiveness. When we do not forgive we set ourselves up for bitterness or vengeance. The price of the former is a twisted and loveless life, while the price of the latter is a violent and cruel life. Neither offers hope. Jesus showed us the way. He offers us forgiveness for our sins through his blood shed on the cross (Eph. 1:7). Yet, if we accept his forgiveness to us, we are indebted in turn to offer forgiveness to others (Lk. 17:4). Jesus taught us to pray this way in the Lord’s Prayer, “And forgive us our debts, as we also have forgiven our debtors” (Matt. 6:12).

Almodovar is no Christian and his answer is humanistic. His answers to the themes are skin-deep. But this film is a superb story, cleverly told, that allows him, and us, to reflect on these themes. It is a rare movie of philosophical and artistic depth. But for the more conservative be warned: The Skin I Live In depicts sex and violence that is more than skin-deep.