What appears to be a standard courtroom drama is actually a surprisingly suspenseful thriller with several twists that keep the film moving right up to the surprise ending. Hoblit, whose previous trial film Fracture was also under-rated, delves into the pysche to explore questions of the goodness of man. He probed evil in the form of demon possession in Fallen, but here he sticks strictly to humanity. Are we fundamentally good or not?

Set in Chicago, Archbishop Rushman is brutally murdered in his room. With blood everywhere, the main suspect is a teenage altar boy Aaron (Edward Norton), who is seen running from the scene of the crime covered in the bishop's blood. Arrested and accused of the crime, he is a stuttering naive hick en route to the hot chair with only the public defendant's office between him and a swift execution. But when hotshot lawyer Martin Vail (Richard Gere) sees this on the TV, he realizes this is prime opportunity for some free publicity, and offers his service pro bono. To complicate the matter, the prosecutor assigned is Janet Venable (Laura Linney), Vail's ex-lover.

The case proceeds to trial in a rushed and hasty manner. But as it does, Vail suspects a third man present in the bishop's quarters. Aaron's defense, as shaky as it is, rests on his blackouts and this third person. When Vail hires a psychiatrist (Frances McDormand, Fargo) to dig into Aaron's mental state she finds evidence that might clear him, if permitted.

One of the strengths of Primal Fear is the acting. This is Norton's debut and he gives a tremendous performance as a poor boy in the middle of something bigger than he can imagine. His star potential is evident in this film. Gere, already a star, is solid as an arrogant but only half-jaded attorney who still see some good in humanity. These two make the movie work. The film gets a little confusing with a sub-plot related to property development. But this does tie in, as becomes clear later. The other plot twists move the story along at a decent pace. Venables, though, seems more trapped than Aaron. With a case that appears open-and-closed, her position becomes more and more precarious. Her final confrontation with Aaron seems over-the-top for a lawyer, and triggers the climactic interactions.

One of the issues Hoblit deals with is the make-up of mankind. Vail espouses the thinking clearly, when asked by a reporter why he defends alleged criminals:

The Biblical answer to this question is that all people (except Jesus, the only sinless human) are tainted by sin (Rom. 3:10). We are not fundamentally good, in the sense of being good through and through. We may appear so from the outside. But even these "very, very good people" are corrupt. Indeed, sin has caused each of us to be morally depraved (Gen. 6:5). Each one of us is quite capable of the worst crimes committed by humanity. We can see this when we get angry. We are a hair's breath away from pulling the trigger that could end a life. More often than not we control our urges and anger. This is partly due to social expectations, partly due to judicial punishment (that would be imposed), and partly due to habit and training. But strip away the veneer of civilization and we are no better than the rest.

This is not to paint a totally gloomy picture of mankind. We can do good things. We do. All the time. But even these "are like a filthy rag" (Isa. 64:6). Our good deeds are seen by God through the eyes of our inner motives. These are self-serving. Just as Vail's offer of free legal aid was self-serving. Only when our sin nature has been replaced with a new nature in Christ can we find that our motivations become other-centered and godly. 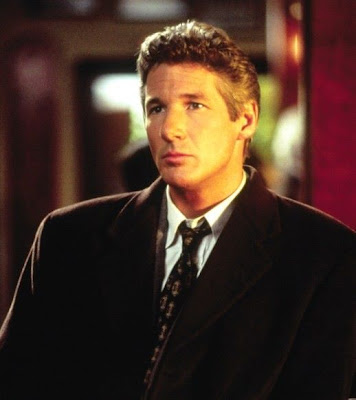 The other major theme of Primal Fear is that of hypocrisy. It is clear from the tagline: "sooner or later a man who wears two faces forgets which one is real." Almost all the main characters are two-faced. Vail offers free legal defense but only because he gets free publicity on prime time television. Aaron has his own hypocrisy. Even the District Attorney has a hidden agenda concealed behind his execute justice slogans.

Hypocrisy is a sin that Jesus vehemently decries in the New Testament. Surrounded by hypocrites, he saved his strongest language for them: "Woe to you, teachers of the law and Pharisees, you hypocrites!" (Matt. 23:13) Those whose public face showed righteous character was in reality a mask hiding corruption within. Judas was another, more personal, figure who lived a hypocritical life. Though he walked with Jesus as an intimate companion for 3 years, he was secretly serving his selfish and greedy ends. He complained when the woman poured a years' worth of perfume on Jesus' feet to wash them in preparation for his death, upset because the money seemed squandered yet was pilfering to profit his own pocket book (Jn. 12:3-6). Hypocrisy is an insidious thing.

When we wear two faces it can be difficult to keep track of both. It is surely better to maintain one face, speak with one voice, and be open and transparent. When we follow Jesus, we not only have him as our defense attorney (1 Jn. 2:1), but he enables us to have victory over our hypocrisy.