Made in Dagenham -- leadership and equality 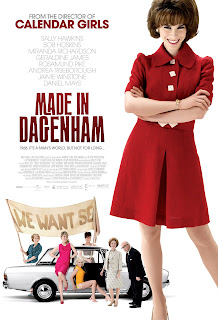 Many people will ask two questions of this movie up front: where is Dagenham? And what is made in Dagenham? Well, Dagenham is a suburb of London, and in the 1960s Ford cars were made in Dagenham. Indeed, Ford Motor Company was one of the largest private employers in the United Kingdom and carried some clout with the Prime Minister, Mr. Harold Wilson, and his cabinet. More than this, though, they employed thousands of men but only 187 women.

Made in Dagenham presents the true story of these women, focused on Rita O’Grady (Sally Hawkins, Happy Go Lucky), a normal working-class mother and wife, who took on this giant and won. It is a David vs Goliath story that has tremendous heart, and much of this goes to the stellar casting. Hawkins delights as Rita, giving her a lightness of spirit that charms and endears, even as she fights valiantly for what she believes in. Bob Hoskins provides excellent support as the union rep Albert Passingham who sees the potential in Rita when no one else does, including her husband Eddie (Daniel Mays).

Rita and her fellow female workers sew car seat upholstery as machinists. They slave away in sweatshop conditions, literally, having to strip down to bra and panties in the heat, and having to put up umbrellas to catch the drips when it rains.

Since these women have been reclassified as unskilled, rather than semi-skilled, workers they decide to stand up to management. Albert takes shop steward Connie (Geraldine James) and Rita as his team to present their claims to the snotty managers. When the “old-boys school” manner takes over and management offers empty promises, Rita interrupts the chief union rep, speaking her mind. And she tells the managers the truth, setting the stage for a strike by the women, something no one believed would happen.

With this, Albert realizes Rita is a natural leader. Taking her aside, he tells her why he, alone, of all the men supports the women. He shares a heart-felt story of his youth. And she picks up the baton, becoming the leader he envisions, even though it undermines her marriage and family.

Rita offers a wonderful picture of leadership. Not looking for such a position, it found her and she rose to the occasion. People often claim that leaders are born not made, but leaders can learn and be groomed. Leadership is a talent that can be developed. In Rita’s case, she becomes visibly stronger as her opportunities to speak increase. Her leadership flows from her passion, commitment and integrity. She is reminiscent of David, the second King of the Israelites in the Old Testament. He, too, fought a giant, and he, too, was not seen as a leader initially. When God sent Samuel to anoint one of Jesse’s sons as king, Jesse thought of his older and bigger sons. Even Samuel looked at the outward appearance (1 Sam. 16:6ff). But God had chosen David, and groomed him. Indeed, he had “sought out a man after his own heart and appointed him ruler of his people” (1 Sam. 13:14). We all possess some talent in leadership, and may find the opportunity to demonstrate it, especially if we stand prepared.

The main issue involved lends weight to the plot. When Rita learns that even if they are regraded as semi-skilled, the women will earn an appalling fraction of the men’s wages, the stakes are raised. No longer is it a matter of pay grade; now it is a matter of pay equality. Rita lifts the banner high for women everywhere, and her peers follow her. Leadership in action!

Three scenes stand out, all highly emotional. In the first, Rita toils despondently at home, her family now opposed to her strike, when an acquaintance Lisa (Rosamund Pike, An Education) comes to her flat. Lisa, whose husband is one of the managers opposing Rita, tells her: “I’m Lisa Burnett. I’m 31 years old and I have a first class honors degree from one of the finest universities in the world [Cambridge], and my husband treats me like I’m a fool.” At her middle-class home, she is merely a trophy wife, yet she sees the value of what Rita is doing. She understands she is making history. What an encouragement from an unlikely source. Even the best leaders will face the darkness of the soul and can use encouragement.

Then there is a scene late in the film between Rita and Eddie. Rita has just delivered the speech of her life, despite the fact that hours before she argued with Eddie about her involvement. He had berated and belittled her. Now, he comes to her and emotionally apologizes, offering his belated but whole-hearted support. 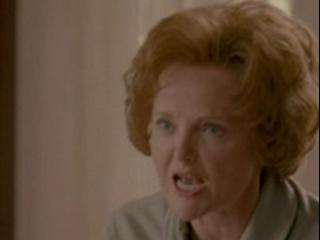 The third scene involves Barbara Castle (Miranda Richardson), Harold Wilson’s Secretary of State. She rises from her desk and tells her two dunderheaded assistants: “I am what is known as a fiery redhead. Now, I hate to make this a matter of appearance and go all womanly on you, but there you have it. And me standing up like this is in fact just that redheaded fieriness leaping to the fore. Credence? I will give credence to their cause. My God! Their cause already has credence. It is equal pay. Equal pay is common justice.” The top female politician understands and supports Rita’s cause.

The thrust of the ethics involved focuses on equality and dignity of women. In the eyes of God, man and woman stand equal in personhood and being. Both are formed in his image (Gen. 1:26). Both deserve equal pay for equal work. Rita’s leadership forged the way for a bill in English Parliament that enabled this. Yet, still today in many countries women are treated as second-class citizens, earning less than male workers. Even in the United States, Census Bureau data shows that in 2008 women earned in general 77% of what men earned. Four decades after Rita O’Grady, American women are still not getting equal pay! The Paycheck Fairness Act approved by the House of Representatives in 2009, which would expand the scope of equal pay, failed to pass Senate and continues to be debated in Congress even today. Sadly, such injustice and inequality is still the state of the union.

Made in Dagenham offers dual benefits: excellent entertainment and ethical enlightenment. Not many films can stake that claim. And when most things carry the tag, “Made in China”, it is a blessing to remember a time when products were “Made in England”!