Across the Universe -- A totally fun experience 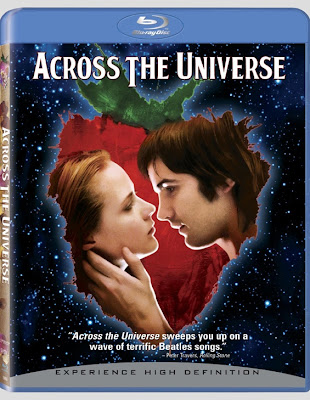 I don't like musicals . . . there I said it. It's off my chest. Sad to say, I never made it through the opening credits of West Side Story before I gave up. So, I still can't explain why two of the funnest movies of the last 12 months for me were musicals. The first was Hairspray, which I saw at the coast last summer -- that was a total blast. I came out of the movie theater with a silly smile plastered on my face. And the second is Across the Universe.
Across the Universe is more than a musical. Rather it is a love story played out with Beatles songs. The cast sing the songs as their lyrics, and this is surprisingly effective. The songs are sung anachronistically, most of them from the later period even if sung early in the movie, and they seem to capture just the right moment and mood. The movie reminded me a little of Moulin Rouge in this regard, although that movie used 20th century songs in a 19th century setting. This film uses songs from the sixties against the backdrop of mid-late 1960s counterculture. And it works. It is eye-poppingly fantastic, with expansive imagery, emotional and organic musical performances, and incredible solarization color-treatments.
The story is a predictable love story: Jude goes to America to find his estranged father, and there meets and falls in love with the sheltered Lucy. But the journey is so much fun, as it is accompanied by and taken along by the music. According to web-postings and interviews, 90% of the song vocals were recorded live on-set, rather than in studio. So, there is little lip-synching. What an achievement for a cast of mostly non-musicians. 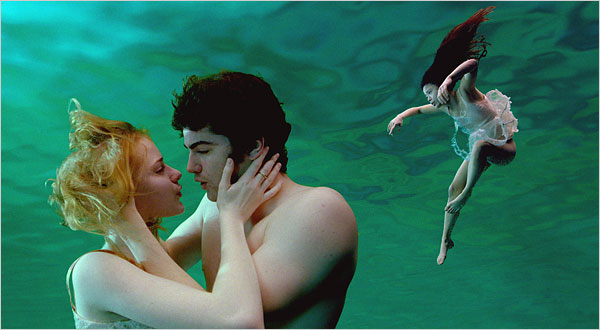 All this said, the movie is a vehicle for the music. There are some favorite Beatles songs and a few rarer ones. There are some great characters: Jude (Jim Sturgess), the working-class boy from Liverpool; Max (Joe Anderson), the rich Princeton drop-out; Lucy (Evan Rachel Wood), Max's naive sister; Sadie (Dana Fuchs), the Janis Joplin-like singer; JoJo (Martin Luther), the Jimi Hendrix-like guitarist; and Prudence (T.V. Carpio).
Across the Universe starts out in the actual Cavern Club in Liverpool where the Beatles played. It begins with a fun, early 60s kind of mood. Progressively, the mood becomes heavier as Max gets drafted and goes through induction, turns psychedelic before becoming dark with the activism of the late 60s. Finally, it closes on a lighter, climactic pop note. All this in the space of two wonderful hours.

There are some outstanding set-piece scenes that are unforgettable. T.V. Carpio sings a beautifully balladic rendition of "I Want to Hold Your Hand" and as she does she walks across a football field of "balletic" players. The Detroit riots form the backdrop for "Let it Be" by a 15 year-old unnamed singer and Carol Wood. This is a powerful moment. "Strawberry Fields" is incredibly sung as Jude, now a budding artist, uses strawberries in his art. He pins strawberries to the canvas, and they seep juice, representing the GIs who are shedding their blood in Vietnam. Jude uses "Revolution" as he jealously confronts Lucy's radical activist leader, Paco. They all want a revolution, but none can seem to make one happen.
But the two finest songs and set-pieces are saved to the end. "Hey Jude" is sung by Max in a New York bar, as he ponders why Jude is back in Liverpool. We see Max draining his

last beer, looking in the mirror and singing. Juxtaposed against this, is Jude sitting drinking his ale in a Liverpool pub wondering why he is not seeking his love. And when the song breaks out into "Judy, Judy, Judy, Judy, Judy" the two come face-to-face and it works wonderfully. The climax of the movie is sung on a roof-top (ala The Beatles last public appearance atop Apple Records in London) -- "All You Need is Love."
Along with the cast singing these set-pieces, there are guest appearances. Most noteworthy of these is Joe Cocker, singing "Come Together" as JoJo comes to New York. This is a great cover of this song. Then Bono, appearing as the psychedelic Dr Roberts, sings "I am the Walrus." This could be better than the original. And Eddy Izzard appears to perform "Mr Kite" in a Monty Python-esque sequence that is the turning point of the movie from happy and high (from drugs), to dark and low (due to the war).
As a story, Across the Universe raises the questions of war (Vietnam), activism, radicalism, revolution, but focuses on love. It never gets too deep. It touches each subject mostly superficially. As Lucy's eyes are opened to freedom, free love, free drugs, her love for Jude takes back-seat to her need to do something about the war. While she starts to work with and follow activist Paco, Jude channels his emotions about the war into his art. Both are seeking outlets using the skills and talents given them. As this progresses, both her activism and his art become radical. This radicalism drives them apart. They cannot coexist with one another.
The climax of the movie comes when Jude, back from Liverpool to find his love, is on the roof-top on his own, and soulfully sings out acapella, "All You Need is Love". Pretty soon, he is joined by the band and the song becomes a full-fledged anthem, the whole point of the movie.
The director seems to be saying love is all you need. Even in the midst of war (Vietnam then, Iraq now), love will prevail. Many returning war vets might disagree with this thesis. Indeed, it begs the question, does love solve all the world's problems? In a biblical sense, it does. God is love (1 Jn 4:16) and He has shown His love for us by sending Jesus (Jn 3:16). Yet, even biblically we are expected to work in the world while we wait for Christ's second coming. So, in this sense, love will not solve all the world's problems. Another minor criticism is the implication that peaceful activism cannot achieve its desired ends. A shot of Dr Martin Luther King Jr, after he is assassinated, is followed by several riot scenes, each progressively worse. Radicals cannot protest peacefully and be effective, it seems to say. And finally, there are other Beatles songs that could have, or should have, been included, several of which are intrinsically referred to in passing.
Yet, despite these minor criticisms, the movie is all about experiencing the magic of these Beatles songs put into a story that captures the hearts, the ears and the eyes. I enjoyed this so much I bought the soundtrack.
Copyright 2008, Martin Baggs
at 6:07 AM