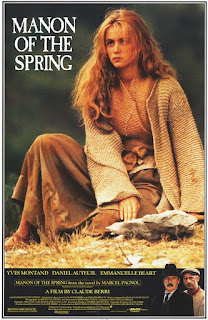 Ten years on from Jean de Florette, all has changed. The Soubeyrans, Cesar (Yves Montand) and nephew Ugolin (Daniel Auteuil), now own the Florette land in Provence, France. They have used the spring of water on that land to irrigate the carnation farm and they are thriving. Life is good to them. Manon (Emmanuelle Beart, 8 Women), on the other hand, remains in the Provence countryside living the lonely life of a goat-herder, apart from her mother, who has returned to her former life as an opera singer.

In the first film Cesar focused on the land, and acquired it through deceptive means at the cost of Florette’s family. Here, though, his focus is on family, not land. As an elderly bachelor, he wants Ugolin to find a woman to marry to continue the Soubeyran name. Of course, when he by chance stumbles on Manon, bathing in a spring, he falls in love and decides this is the woman for him. Meanwhile, Manon has eyes for the new young school-teacher Bernard (Hippolyte Girardot).

An early scene sets the tone for the characters in this love triangle, and it is centered on gift-giving. Ugolin has secretly given Manon a snared rabbit. Bernard wants to give her his pocket knife, but she does not want to accept. Finally, she accepts the knife as long as Bernard takes the rabbit. She is unknowingly rejecting Ugolin and his secret and somewhat deceptive advances.

Like Jean de Florette, Manon of the Spring moves at a majestic pace with a cinematic beauty. This time, though, the story begins with the understanding of the injustice done to Manon and her family. The film stands alone, but when seen as the conclusion of the earlier film, it truly carries the weight of an epic, spanning four generations of a family.

Two accidental discoveries disrupt Manon’s life and put her on a path that intersects Cesar and Ugolin. First, in saving a goat that has fallen down into a cave, Manon finds the source of the spring water: here is the water of life for the Soubeyrans and indeed the whole village. Second, she overhears two villagers discussing how Cesar cheated Jean de Florette out of his land. With these two secrets available to her, Manon plots revenge, blocking the spring and bringing a drought on the village and the land.

Is Manon’s motive revenge? Revenge focuses on exacting punishment for a wrong done by someone, but carries a negative connotation. It is usually done with a vindictive spirit. Scripture warns, “Do not seek revenge or bear a grudge against anyone among your people, but love your neighbor as yourself” (Lev. 19:18). Certainly, there is an aspect of revenge here. But in the broader context of the two films, there is a sense of justice prevailing. Injustice occurred in the first film. But injustice is always wrong, being a misuse of power to take from someone what God has given. God hates injustice: “for with the LORD our God there is no injustice” (2 Chron. 19:7). And since the whole village had some knowledge of the existence of Florette’s spring, they are guilty of Cesar’s injustice to some degree, accomplices after the fact. Manon seeks justice on all who have been implicated.

As Manon’s scheme progresses and the story unfolds with inexorable justice, the Soubeyrans come face to face with tragedy themselves. Furthermore, when the film comes to its climax, Cesar learns a secret that radically shifts his perspective. Just as the first film ended with a shocking ending that left the viewer hanging, Manon of the Spring ends with a surprise that brings real satisfaction. Indeed, this secret illustrates poignantly the biblical truth that God brings “the punishment for the parents’ sins into the laps of their children after them” (Jer. 32:18). The sins of the Soubeyrans’ ancestors have been visited on the children.

The reference to Jeremiah omitted the first part of the verse about God, namely that “You show love to thousands”. And he does. God is a God of love and justice. In Manon of the Spring, injustice is righted and no doubt God is pleased. Justice always results in acts of compassion by God (2 Cor. 1:3) and judgment from God (Jer. 5:26-29). Here, the conclusion shows both, through one event that ironically brings regret to Cesar and rapture to Manon.