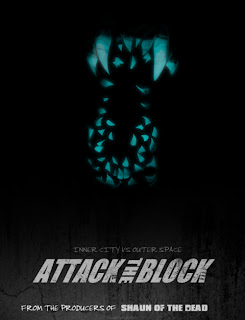 British cinema saw the emergence of B-movie horror films with the Hammer studio in the 1950s. Here, writer-director Cornish’s debut film echoes that genre. The low-budget Attack on the Block has a B-movie horror feel with some very dark British humor thrown in. And the accents are thick and dark, so may be a little difficult for non-Brits.

The movie opens with Sam (Jodie Whittaker), a young nurse, walking home through the streets of inner city South London. Confronted by a gang of young teenage hoodlums, she is mugged at knife-point. Before they can do anything more than steal her purse and ring, a meteor crashes through the roof of the car next to her. But this is no meteor.

Cornish himself was mugged in South London in a similar fashion. Recognizing that his assailants were as scared as he was, he began researching young thugs and was inspired to make this film.

As Sam flees to freedom, the gang, led by Moses (John Boyega) investigate and discover a creature from outer space. Chasing it, Moses kills it and carries the carcass back to his council estate flat. (A council flat is apartment housing in the projects, a low-class ghetto permeated with crime and violence.)

What this bicycle-riding and knife-wielding gang don’t realize is that other monsters will come after them. And they do. Since it is Guy Fawke’s night (England’s answer to Fourth of July), the fireworks are exploding and no one notices these creatures fireballing (and furballing) down ot earth.

After the mugging, Moses’ and Sam cross paths again, first in a police van and then after he rescues her from attack by the creature, his gang find their way to her apartment. She lives in the same project as they do. She is their neighbor. Like it or not, she finds herself cast in with the gang in a live or die effort to defeat this enemy. The hoods have become the heroes in this tale.

Cornish uses mostly unknown actors here. The two leads fare well. Whittaker is credible and does fine work as the nurse. But it is Boyega who stands out. Looking like a young Denzel Washington, he carries himself with an energy and magnetism that draws those around to him. He is a natural and is sure to go on to more and better work. And Nick Frost (Hot Fuzz, Paul) shows up as a stoner, Ron, who minds the weed room for the rapper-gangster Hi-Hatz, who “owns the block”. Ron is a compilation of the roles Frost has played before, so there is no stretch here, but he imparts much of the humor.

The film explores several themes and offers some social commentary. The first focuses on racial disenfranchisement. The gang is mostly black. Their options are limited and they are drifting into petty crime, with just a step from serious drug activity. Their lack of hope and potential leads them to what they see as their only hope. Hi-Hatz, the gangster, is their hero. Rich and bejeweled, they clamour to be in his gang while the younger kids want to join Moses’ gang. The gang offers them the only way up, if not out. Clearly, there is some racial stereotyping going on but this includes some truth.

A second theme looks at the class barriers and territorialism. The black gang saw Sam as a white nurse, one of the enemy, a class apart. From their perspective, she was fair game. But when they discovered she was one of them, living in the same projects they counted her as one of their own. Moreover, once the monsters attacked the block, everyone living in the apartment building was at risk and class and racial barriers meant less. Species barriers meant more.

Race and class set man against man. Hatred is fueled by these divisions. But they are false barriers. In reality, all men, white or black, rich or poor, have the same fundamental dignity and rights. We are all made in the image of God (Gen. 1:26). We are all considered the same when we come to union with Jesus Christ. Paul says in Galatians 3:28: “There is neither Jew nor Gentile, neither slave nor free, nor is there male and female, for you are all one in Christ Jesus.”. 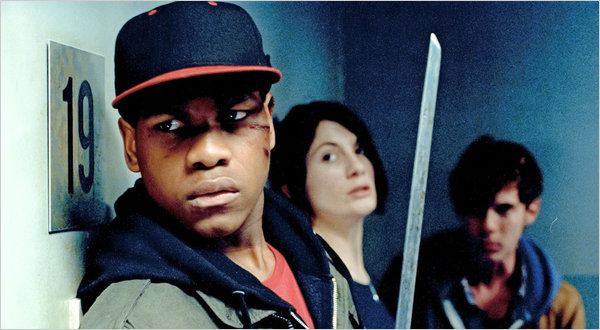 The final theme is that of courage and heroism. Moses and his friends were viewed as juvenile delinquents by most, including Sam. But given the opportunity, they emerged as heroes, protecting themselves and others, even being willing to sacrifice their lives to save those in their block. We all harbor that potential, to be heroes. We may not get the chance to realize it but it is there. How we react and respond to adversity will prove our mettle. Will we emerge as a hero or a coward?

Despite the simplicity of the aliens and of the plot, Cornish does enough to maintain the suspense and keep us watching. And he reminds us of the need to watch out for our neighbors!