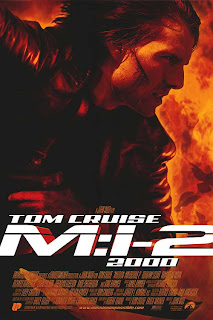 For the second installment of Mission Impossible, the producers turned to a new director. Known for his Hong Kong action films, Woo brings his ultra-choreographed set pieces to this thrill pill. And he brings doves and guns galore, two of his directorial trademarks.

Tom Cruise reprises his role as Ethan Hunt, IMF secret agent and all-around super-cool guy. Before he even gets his mission, we see him climbing impossible rock formations alone in the Utah desert. Hanging from the fingertips of one hand hundreds of feet above the rocky floor below, we believe this man can do the impossible. Then he gets his mission: he must find and retrieve something called chimera, selecting two agents and using one civilian. And he's off on a chase that is faster than the first film even while the plot is slimmer and less absorbing.

Despite the first couple of scenes with Nyah, where she attempts a jewel heist amidst a Spanish flamenco dance, and when she races Hunt around twisting mountain passes, she does not get to take part in the action. Indeed, one of the themes of the movie appears anti-feminist. In a discussion with his commander, Ethan points out: "She's got no training for this kind of thing." But Commander Swanbeck (Anthony Hopkins, The Silence of the Lambs) replies, "What? To go to bed with a man and lie to him? She's a woman - she's got all the training she needs."  Later, Sean Ambrose comments about Nyah, "You know women, mate. Like monkeys, they are - won't let go of one branch until they've got hold of the next."

This minimizing of women is anathema to feminists and is contrary to Christian teachings. Women are not innately trained to lie to men. They may do so, but so do men. Indeed, we all lie regardless of gender. The decalogue was aimed at all people, and one of the ten commandments declares: "Do not lie" (Lev. 19:11). Moreover, although they are considered the fairer sex, they are just as capable of learning to fight as men. Women serve in police forces and the military around the world.

Like the first film, Hunt employs masks. Actually there are more masks used here, too much in fact and it even becomes somewhat confusing. The action sequences, though, are more expansive if less believable (if that's possible). Seeing Hunt riding a motorcycle and firing a gun using only his rear-view mirror for aim is over the top. But then so is the motorcycle duel that climaxes the film. This is more kung fu choreography than anything. Hunt employs martial arts in his fights, something he didn't do before.

And of course, what is a Mission Impossible film with dangling acrobatics. Hunt once again finds himself dropped from a cable. This time into a lab to steal the chimera virus.

But back to themes. The opening of the film shows a scientist speaking into a camera: "Every search for a hero must begin with something which every hero requires, a villain." Sean Ambrose may be the human villain, but chimera is the real one. Indeed, Ambrose makes a less than compelling villain. He has little that is memorable. Unlike the first film, where the villain is mysterious, Amrbose is a by-the-book nemesis.

The scientist is correct. We cannot understand good unless we contrast it with evil. Good on its own has no context. In Eden, God instructed Adam not to eat from the tree of the knowledge of good and evil (Gen. 2:17). Obeying offered a theoretical knowledge of evil, but disobeying provided practical experience of good and evil and the introduction of sin into the world (Gen. 3). Like light shining in the midst of darkness, good stands as a clear bastion when set against evil.

More than this though, a hero requires a villain. We have one in real life: Jesus. But we would not know the extent of his heroics or his love without his nemesis: Satan. The beauty of the cross can only be understood when seen as the method of defeating the devil. We look to Jesus Christ, not Ethan Hunt, when we want our true hero.