A Mighty Heart -- Dying for truth 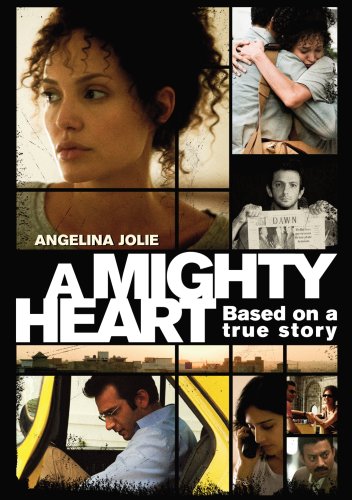 Movies don't always have happy endings. And when the movie is based on a true story, and we know the ending is tragic, is that movie a fun experience? A Mighty Heart is just such a movie. Not fun in the light-hearted sense, but it certainly is informative and educational.

This is the story of the kidnapping of Wall Street Journal reporter Daniel Pearl (Dan Futterman) that shocked America and the world. After reporting on the war in Pakistan, Danny and his French wife Mariane (Angeline Jolie) decided to remain in Karachi. But in 2002 ready to return home, Danny has one interview to do on the eve of their departure: this is with Sheik Gilani, a jihadi. He goes to the rendezvous but never returns.

Pregnant Mariane begins the unfathomable inner journey of waiting. Never giving up hope, with the help of US officials, Pakistani police, and her friend Asra (Archie Panjabi, the older sister in Bend it Like Beckham, and the love interest in the new terrorist movie Traitor), she seeks to understand why he is kidnapped and how he can be rescued.

The movie is slow, even boring in stretches, and sometimes confusing. Mariane's flashbacks occur without introduction, so at times it appears that Danny is safe and well and with her again. As much as this is needless, on the flip side the graininess of the night footage and the moving camera with the police activities add positively to the confusion. They portray the sense of impotence that the searchers must have been feeling. Further, with so much chaos in the city, with so many people, and not knowing who is a jihadi and who is a friend, these choppy sequences communicate a feeling of loss and helplessness.

Though the movie has a melancholic plot narrative, Jolie portrays a woman with a sense of hope and a strong heart. Is the "mighty heart" of the title a reference to Danny, as a courageous journalist who sought the truth and never lied in his articles, or his wife, who faced up to circumstances with inner fortitude? The book written by Mariane refers to her husband's courage. But perhaps here it is a nuanced reference to both husband and wife. Regardless, Jolie displays a level of acting not seen since she won an Oscar for her role in Girl Interrupted. And this carries the film.

Why was Daniel Pearl kidnapped and subsequently murdered? The movie does not answer these questions. Although it is first reported that he was a spy, this is rescinded. Was it because of his Jewish faith? Or was he simply in the wrong place at the wrong time? He went seeking truth from a terrorist and was willing to put his life on the line as a journalist to bring this truth to the public. A Mighty Heart is as much as message of remembrance as it as a call to recognize the dangers that journalists face in going to war-torn and third-world countries.

Two issues stand out in A Mighty Heart. First, how do we deal with the difficulties of life? Most of our troubles pale compared to this horrifying experience that Mariane had to face. Yet, she plumbed the depths of her heart and found courage and hope. Even when facing television interviewers, she carried herself with grace and patience. If our trials are less consequential, can we not also bear under them with grace and patience, with a mighty heart of our own?

Second, if Danny Pearl was willing to make the ultimate sacrifice for truth, how far are we willing to go for that same virtue? Are we driven to discover truth? How much of our own lives are transparent and truth-filled? Each step we take on the path of truth, speaking the truth and searching for the truth, is a step forward on the narrative path of our own character arc.

Ultimately, A Mighty Heart reminds us of the sacrifice Jesus gave for the truth. Standing in front of another political 'terrorist', Pilate, Jesus said "You are right in saying I am a king. In fact, for this reason I was born, and for this I came into the world, to testify to the truth. Everyone on the side of truth listens to me." But Pilate ignored the words of Jesus, and spat out cynically, "What is truth!" (John 18:37-38). Terrorists tend to ignore truth, killing the innocent to hide it. We may not be a Danny Pearl, but all we face the question of what to do with Jesus Christ. The one who said, "I am the way and the truth and the life," (John 14:6) expects us to give a response. Will we accept this truth, or will we bury it and kill it as Danny was killed? The choice is a personal one, and calls for decision of our own mighty heart.