Life is Beautiful: A Modern Fable 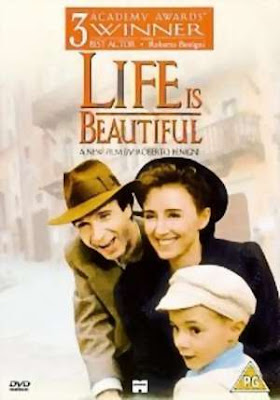 Life is Beautiful begins by stating that it is a fable. Now a fable is a story often beyond reality, to provide a moral lesson. The lesson is the point. This movie defies genre but accomplishes its point as a fable. It is part comedy, part romance, part war story, part horror story. Yet it works and portrays a most beautiful and touching story.

Roberto Benigni, writer, director and star, plays a naive Jew, Guido, from the Italian countryside who makes his way to the big city in 1939. En route, he dramatically meets a beautiful woman, whom he pursues in the first part of the movie. Guido is a compelling and sympathetic protaganist who finds so much joy in life regardless of circumstances. We root for him as he woos his love, his princess. The first half of the movie is a celebration of love, of innocence in the midst of the beginnings of the war and the holocaust. Love continues despite war. Love is above war. Through a set of circumstances, Benigni wins his bride, and they ride off into the proverbial sunset on a white charger, though this white charger has been painted green with anti-semitic slogans emblazoned by nazi youth. The first half of the movie ends with Guido happily married to Dora with a young son, Joshua. They have a complete and perfect life. Life is indeed beautiful.

Then the second act opens. Guido and Joshua are arrested and taken to a train station for transportation to a concentration camp. Dora, discovering their absence on Joshua's birthday, goes to the station to complain to the German officer. There is no sympathy there. So, in an unexpected turn, Dora, a non-Jew, asks to be let aboard the train so she can go where her family is going, not knowing this might lead to death. The German agrees and she is herded into one of the cattle trucks.

The pathos is highlighted by Guido's determination not to let his young son understand the harsh reality of the concentration camp. He wants to protect him and his innocence. To do this, he tells him it is all a game, and if they play by the rules, they will win points and ultimately win a brand new tank. In an hilarious scene, amidst the horrors of the introduction to the camp, Guido acts as an interpreter for the German Kommandant and "translates" the German into Italian, while actually telling his son the rules of the game.

If the first act focused on the romantic side of love, the second act focuses on the sacrifical side of love. Guido goes to all kinds of lengths and dangers to protect his son. He also takes great risks to communicate with Dora, who is imprisoned in a different part of the camp. In one scene, Guido creeps into the radio hut to use the intercom to tell his wife she is his princess. In another moving scene, reminiscent of The Shawshank Redemption, he plays a favorite opera lp album for her (and others) to hear, to remind her of his love. At all times, he is risking death in taking these steps. But he is driven by love: love for Joshua and love for Dora. At the end, knowing he must do something to save his family before the Germans "dispose" of the evidence in the camp, he makes the ultimate sacrifice to save his son. His love for his son is greater than his love for his own life. "Greater love has no one than this, that he lay down his life for his friends" (Jn 15:13). This is a clear and tender, ever tearful, illustration of the biblical concept of love. And Guido's love for his wife, and his willingness to do anything for her, is an example of Ephesians 5.
As the movie ends, Joshua is confronted by a brand new (American) tank. He has apparently won the game and won his tank! He is lifted into it by the American liberator, and as they drive past the slowly walking line of freed Jewish prisoners he sees his mother, alive and safe. He is put down, runs into her arms, and says "we won." The fable is that love will win out in the end. Despite war, despite persecution, despite sacrifice (or perhaps through sacrifice) and loss, love will win. Life is Beautiful is a wonderful movie that beautifully communicates the message that "love, family and imagination conquer all." It is a portrait of human transcendance, in the midst of pain and suffering. It reminds us that the human spirit, fueled by sacrifical love, can and will conquer all. Whether you love foreign films or not, this is one that you simply must see!
Copyright 2008, Martin Baggs