Serpico -- Character in the midst of Corruption 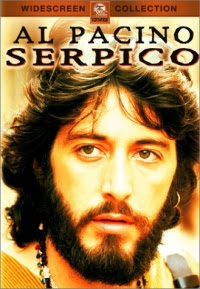 Serpico, starring Al Pacino, is the true yet sad story of Frank Serpico from his beginnings as a rookie cop to his undercover work on the narcotics squad in the early 1970s. In an award winning performance (Golden Globe winner, Oscar nominated), we initially see Serpico as a short-haired street cop who wants to do the right thing. However, he very quickly learns that most cops don't.

An early scene has the young Serpico, on car patrol, hear that a rape is in progress, though it is in a quadrant over, not his patrol quadrant. His dozing partner says essentially, "Ignore it, it's not our quadrant." But Serpico says, "It's right on the edge of our quadrant" and goes to the rescue. In doing so, he captures one rapist. As this scene moves to the station room, we find a veteran detective beating the crap out of this rapist, while Serpico decides not to participate in this violently abuse. Instead, he offers the young criminal coffee, compassion and an opportunity to rat out his fellow rapists. This softer approach wins out this time. But already the lines within the force are drawn.

As Serpico's career progresses he moves to undercover work, and it is here that the key theme of corruption emerges. Unlike all the cops around him, Serpico will not accept money. At first he is naive on what is going on, but he becomes more cynical while remaining straight and true, and honest as the day is long. Many of his fellow officers considered him the most dangerous man alive since he is apparently the only honest cop in New York City.

Serpico tries to take a stand, raising the moral issue to higher powers that be within the force, only to be told to wait it out -- things are happening. He is being strung along, so that he will do nothing. But all the while, the stress of the scorn and mistreatment from his "fellow officers" causes him to lose one female relationship and then a second. We see his hair grow, his mustache bloom, his dog balloon from a pup to a huge bear-like animal, but all the while Serpico will not change, he will not compromise his values -- he is an honest man trying to do an honest job without any support from those who should be there for him. This is tearing him and his relationships apart. Only his dog stays with him.

Toward the end it is evident that going to a grand jury is not solving the problem, although it is making it clear that he is an enemy to most of the police force, who would prefer to see him dead. He finally takes a bullet that almost ends his life because his "partners" don't give him back-up.

This movie addresses the themes of honesty, integrity and character. It raises the question of what would we do if all those around us in our job or career were corrupt. With growing hostile peer pressure would we buckle, turn a blind-eye, even succumb to the temptation to be "one of the boys," or would we retain our integrity even while being painted a pariah? If this pressure become so much that it threatened our relationships at home, would that make a difference, would we change? Where do we see corruption today? Have we seen it yet? Are we ready to stand firm and do the right thing? It is something Serpico forces us to consider.
Copyright 2008, Martin Baggs
at 11:08 AM