Eastern Promises -- Too violent for me 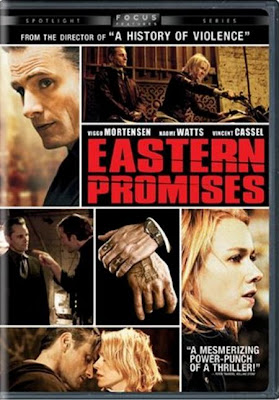 Let me say up front, Eastern Promises is shockingly violent. If you have a weak stomach, avoid this movie. Despite great acting by the leads, Viggo Mortenson and Naomi Watts, this is a dark tale of depravity in the seedy underbelly of life in the Russian section of modern-day London. This movie attempts to be a modern day Godfather, with different mobs of Russian and Chechen nationalities, yet it lacks the deliberative character development of that classic and it overflows with gratuitous violence.

The tag-line is "every sin leaves a mark" and it appears that these marks are both physical, as tattoos on the bodies of the Russian gangsters, and spiritual/psychological, in their cruel spirits and damaged psyches. An old adage says "there is honor among thieves." But not according to this movie. There is corruption, there is brutality, there is violence, but there is no honor.

Eastern Promises does raise a few ethical questions to ponder. Should a person's private diary remain private after death? If Anna (Watts' character) had not opened the diary and asked for its translation, none of the terrible troubles would have happened. Is this a story of redemption or merely corruption? Is Nikolai (Viggo's character), and the "hero," a better man at the end of the movie or has he been corrupted by absolute power? Was it right and beneficial to watch this movie? In my opinion, it was too graphic, too gory, and excessively and unneccesarily violent.
Copyright 2008, Martin Baggs
at 6:25 PM