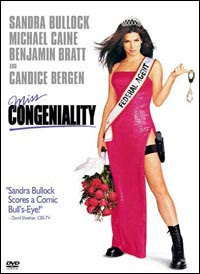 February is not only the month for Valentine’s Day but also my wife, Amy's birthday. In honor of her, I wanted to post some thoughts on her favorite movie, Miss Congeniality, the story of an FBI “operative posing as a pageant contestant in order to ferret out a terrorist targeting the event.”

The movie opens by introducing us to a not-so-graceful, bumbling FBI agent, Gracie Hart, a tough girl competing in a world of boys. She is a woman “without a discernible smidgen of estrogen.” Everything about her is masculine, including her shoes. She is tough and she likes to work out by punching and kicking. Once it was decided that the FBI would send an undercover agent to the Miss United States pageant, ‘dirty Harriet’ was the least likely but only choice they had. However, after an extreme makeover, Mustang Sally is actually gorgeous, according to her fellow agent, even though walking in heels still proved to be a not so easy task.

Once a contestant in the pageant, Hart is now competing in a world of girls in which she feels ‘totally’ lost and draws a blank when trying to ‘girl talk’. She must discover her feminine side if she is going to successfully convince everyone that she is a real beauty pageant contestant; but she also must retain her toughness if she is going to expose and capture the elusive terrorist. Hart’s struggle throughout the undercover mission is being tough and being feminine at the same time, which is what will be required in order to catch the ‘Citizen’. Gracie makes it to the top five and in her final interview, she demonstrates her femininity by stating her camaraderie with the other contestants and then demonstrates her toughness by stating that she would take out anyone who tried to hurt them. In the end, she is named Miss Congeniality and the movie concludes with the song lyrics, “she’s a lady.” Therefore, the message of Miss Congeniality is that a woman can be both tough and feminine at the same time.

I asked my wife why Miss Congeniality was her favorite movie. She teaches group strength training classes at a local athletic club, yet she is very feminine and absolutely gorgeous. I asked her if she liked the movie so much because she resonated with the message that a woman can be both tough and feminine at the same time. She accused me of psychoanalyzing her but acknowledged that she does believe that to be true.
Copyright 2008, Ryan Blue