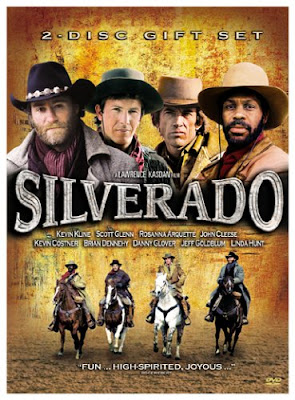 After watching 3:10 to Yuma, I'm on a bit of a Western kick, having gotten several recommendations. This is an old movie and pretty predictable.
Two brothers, Jake (a campy, joking Kevin Costner) and Emmett (Scott Glenn), and 2 strangers, Paden (Kevin Kline) and Mal (Danny Glover) as they seek to right the injustices being done in Silverado by a controlling Sheriff Cobb (Brian Dennehy) and crooked landowner.
The movie opens well enough with four gunmen trying to kill Emmett, who is sleeping in a barn. He avoids death, obviously, and now needs to know who wants him dead. In the next scene he meets Paden, who has been robbed, stripped and left to die of thirst or exposure. From there the two become acquainted, on their way to the town of Turley. Emmett's brother is in trouble tin Turley with the law, Sheriff Langston. In the saloon they meet Mal, as he gets thrown out of town by the sheriff. In this way, the four heroes cross paths on the way to Silverado.
The first half of the movie is quite amusing for the simple fact that John Cleese plays Langston as a stiff upper-lipped Brit: "I'm Sheriff John Langston. As you may have guessed, I am not from these parts." The only other western I can recall with a British character was Unforgiven, with Richard Harris as English Rob, one of the bad guys not the lawman.
But once the second half begins, the four friends are in Silverado each with his own quest. Paden is the most interesting, and he has the fullest character arc, moving from totally uncaring to caring enough for the dimunitive dwarf, Stella (played by Oscar-winner, Linda Hunt), that he will get involved. There are cliche-ridden set-pieces, such as the cattle stampede to mask the coming of the rescuers. There are plot developments so plain that Stevie Wonder would see them coming. And there is the ending that was telegraphed by Alexander Graham Bell.
The sharpest line comes from Stella the dwarf: "Cobb's using me to stop you. So good people are being hurt because of me. That makes me mad. Some people think because they're stronger, or meaner, that they can push you around. I've seen a lot of that. But it's only true if you let it be. The world is what you make of it." This made me think of all the bullies in the world who push the little guys around. Only when we stand up to them, even at the cost of some pain, will they eventually back down.
Further, this last line is so good, it gets repeated, "The world is what you make of it, friend. If it doesn't fit, you make alterations." We cannot be mere passive spectators, waiting on what the world throws at us, we should be active participants in this world we live in. God has put us here for a reason, and that includes serving Jesus (Eph 4:12, Rom 12:11) and spreading His gospel and His love (Matt 28:19). We can make alterations, but mostly in ourselves. It does inspire us to action, though not to make the world what we want but to make the world what Jesus wants by being His hands, feet and voice here and now!
Copyright 2008, Martin Baggs
at 5:29 PM