There Will be Blood -- moral disintegration personified 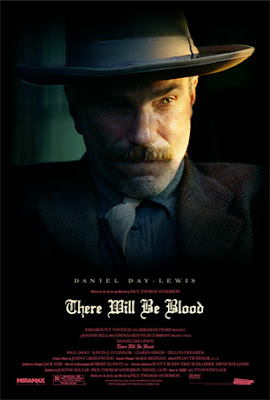 I still can't decide if I really liked There Will be Blood. Nevertheless, it was a powerful movie with a tour-de-force performance by Daniel Day Lewis as Daniel Plainview, a cold and heartless oilman. Yet, the story moved too slowly for my taste, and rather than having the typical hero arc, it had an anti-hero with a self-destructive one.

Unlike most movies where the goal of the hero is set out in act 1, it is not till late in the movie when we really discover Plainview's goal. He says it plainly: "I want to earn enough money that I can get away from everyone." Moreover, he self-discloses: "I have a competition in me. I want no one else to succeed. I hate most people." So, here is the premise of the movie: what will success look like and what will it do to a man who is driven to succeed, to win at all costs, who hates most people? How will he handle success, family, community? More importantly perhaps, how will he handle faith?

The movie opens with an expansive shot of a New Mexico landscape set against severely discordant music. In fact, the prolonged establishing scene plays without dialog for almost 12 minutes. During this time, we meet Plainview and see him mining on his own for silver at the turn-of-the-century. We see him as a determined man, who will single-handedly accomplish his goals, regardless of the challenges and obstacles that come his way, whether they are broken bones or unselling landowners.

Having found little silver, he finds liquid gold -- oil. And once he knows there is oil, he develops his own mining techniques to plumb this river of gold. Little by little his operations grow, and he starts buying or leasing land-rights in his insatiable ambition. At this point he meets Paul Sunday (Paul Dano), who offers to sell him information on the location of oil fields in Little Boston, California, and the movie moves to that locale for the rest of the film.

Fast forward to Plainview in California where Plainview has set up camp with his "son" H.W., who is in fact the son of one of his workers killed working the mine early in the film. The heart of the movie is here, especially in his growing competitive interactions with Paul's twin brother, Eli who is the charismatic and manipulative preacher for this small community. Before the drilling begins, Eli (also Paul Dano) offers to say a blessing for the well. Plainview agrees to this, but at the last minute surrounds himself with H.W. and Mary, Eli's little sister, and proclaims his own blessing. This is reminiscent of Jacob stealing Esau's blessing in Genesis 27.

Plainview appears to love H.W. but in the middle of the movie, just as oil gushes out of the new well, an accident occurs. And in this accident, H.W. is hurt and his hearing destroyed. As H.W. lays on Plainview's table, the oil ignites and Plainfield leaves H.W. to go deal with the conflagration. From here on, H.W. is damaged goods. Plainview sends him away, and this is indicative of his discarding of people whom he no longer needs or can use. He has no significant relationships, other than those that benefit him, such as his right-hand man Fletcher Hamilton (Ciaran Hinds). Even when a long-lost brother appears, Plainview is not excited. He is suspicious. He eventually unravels the truth and discards this "brother" in a different way.

There are two key parallel scenes that drive to the very heart of the movie. The first is the "redemption" and "baptism" of Plainfield in Eli's church. Plainview needs to build a pipeline to the ocean, but there is a holdout whose land lies between the oil and the sea. This holdout offers to sign the contract if Plainview joins the church, which is only possible if he converts. So, he comes to church and comes forward as a "sinner." As Eli berates him, Plainview has to admit to his sin. He does, but not loud enough. Eli physically abuses him, humiliating and humbling him until Plainview shouts out in anger, "I want the blood!" Whose blood does he want? Is it Christ's, or Eli's? Or is this blood he wants simply the oil itself?

Jeffery Overstreet, in his CT on-line review of the movie sees the oil as a metaphor for blood. This may be so. But I see it, too, as a metaphor for money and wealth. In this sense, we see the conflict between God and Mammon. The Bible says "You cannot serve both God and money" (Matt 6:24). Plainview understands this and serves his god. Eli may have deceived himself, because by the end he makes his choice too.

In the second scene, years later, Plainview has attained his goal. He has more than enough money and he lives apart from people, except for his servants. He has even severed any lingering relationship with H.W. Eli, now a polished and dapper preacher, comes to visit him, finding him drunk and unconscious. Like his brother earlier in the movie, Eli offers him oil. This time, however, it is not new news. And Eli is after money, since he has lost it all in the market crash. Plainview, realizing he now has the upper hand, agrees to the offer provided Eli will renounce his faith to him. In a parallel to the earlier scene, Eli has to humiliate himself in plain view of Plainview. And he does renounce his faith . . . all to get his hands on his desired money. But when he does so, Plainview backs out of the contract, much like he did with the blessing earlier. He has control. He has won. But by this time winning is no different than losing. They have become one. The moral disintegration of the man is complete.

In Eli we see a foil to Plainview. We see greed and ego, just a quieter, more sanctified version. Both lead characters struggle with these character flaws. Plainview, says at one point that he prefers "plain speaking," yet he says anything to get his way. His name appears as a symbol for his character -- he is not in plain view. He is deceptive, manipulative, completely controlling. At one point in the movie, one character suggests he does not know how to run his family. At this, Plainview becomes angry and in rage threatens to kill him. Not only does he want to win, he is not willing to be perceived to be a failure or in need of anyone's help. Plainview is a picture of human depravity. He is a personification of the darkness of the human heart, where love is absent.

Blood shows us that as humans we cannot live without relationships. We were made for community. "It is not good for the man to be alone," said God in the beginning (Gen. 2:18). We need each other, not just for what they can do for us, but for what we can do for them. Competition, though healthy in its place, can be severely hazardous to the health of all when it becomes more important than community. (How am I doing with competitiveness, as a broken, mixed-up first-born?) Blood shows us that hatred will destroy, like a cancer eating away at our soul until we are left black and numb, selfish and uncaring, dead while still living. And Blood shows us that though wealth may look good on the outside, when our heart is focused on money Mammon owns us. It will not solve our problems. They will catch us out.

When grace is absent, when love is missing, life is not life. Though Plainview was probably abused as a child, and had no apparent relationship with his father, that is not sufficient cause to become the person he became. Successful by the world's standards is a poor epitaph for an eternity alone.
Copyright 2008, Martin Baggs
at 5:16 AM