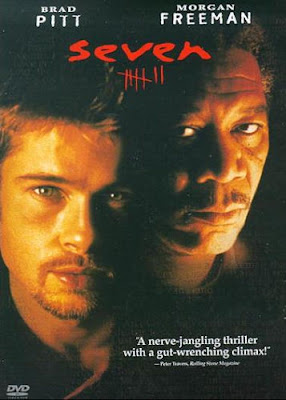 Se7en is a buddy-cop, serial killer movie, but with a twist. Morgan Freeman plays Det. Somerset, the aging, grizzled, cynical detective who is one case and one week away from retirement. Brad Pitt is "rookie" Det Mills, just transferred into New York City and on his first big city murder case. This is standard fare, with terrific performances from Freeman (such a fine actor) and Pitt (not so pretty in this picture), until we realize the serial killer is playing with religious themes. And therein lies the twist. Does the killer see society better than the rest of us?

The movie opens with one patrolman asking Somerset, "Why do you ask so many questions?" The patrolman apathetically wants to negate curiosity and involvement; this is one of the key themes. Also, the mood and music of the very first scene is predictive of the whole movie. It is gray, and wet, and the house is dank and dilapidated. In all, this will be a dark, grim movie. One of the characters describes this part of New York City in one word -- "horrible". And Det Somerset prophetically says "There will be no happy ending" -- this is darkly foreboding of the next two hours.

As the plot proceeds, it becomes clear that the mysterious serial killer is an educated man who is murdering people along the lines of the seven deadly sins of the medieval Catholic church (lust, gluttony, greed, sloth, wrath, envy and pride). This is a big clue as to motive. Along the way, there is violence and a number of deeply disturbing images.

It is only when the serial killer is "captured" that the movie themes come to light. The killer is lashing out at society. He says we are tolerant of sin, it is all around us. He claims we live lives of apathy, not caring, not getting involved to make things better. Here is a key ethical question: has American society become so depraved that we tolerate, even dwell in, sin? In many cases, we are apathetic toward sin, and we have gotten to a point where sin is often tolerated. We lose ourselves in mindless or mind-numbing entertainment, in drugs (legal or illegal), because we don't want to get involved. The killer's point is that we are all capable of sin, even deadly sin given sufficient provocation. We are all guilty; none are innocent. This could be straight from Romans 2-3. The depraved nature of humanity is exposed for what it is. It is indeed a dark and murky picture of the human heart.

When questioned at the end, the killer says, "The Lord works in mysterious ways," implying that he is doing the Lord's work in killing the "guilty" and bringing this to the attention of society. But biblically, though we all deserve death, God has not given us the right to become lawless muderers. He has instituted governments and their law enforcement arms (Rom 13) to keep order in society and to bring justice. Ethically and morally we have no right to take matters into our own hands. Indeed, it is an afront to Christ to suggest He is using serial killers in this way. However, it does raise the ethical dilemna: if God is sovereign and in control of all events, how do serial killers fit into His plan? Or to extrapolate, how do megalomaniacal tyrants (read Hitler, etc) fit into God's plan?

The climax has a twist that is unseen until seconds before it arrives. Without giving it away, it poses the question of what would we do in the face of evil, an evil that has personally impacted us? The movie suggests we are a hair-breadth away from becoming one with the killer. We could be him. There is little room here for God's vengeance, for God's redemptive power of love and grace, or for God's forgiveness.

The movie closes with Det Somerset saying, "Earnest Hemingway once wrote, 'The world is a fine place and worth fighting for.' I believe the second part." That is as close to a positive message as this movie has. The world is a dark and terrible place, filled with guilty sinners, yet it might just be worth fighting for. Though it raises some strong ethical questions, this is a dark movie that many will find disturbing.